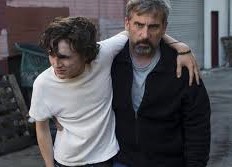 This screen version of the father and son  memoirs of David and Nic Sheff, covering the son's fighting against his drug addiction, was hardly going to be a barrel of laughs. 'Bleakly heavy' would be a fair summary, so don't go if you're looking for a mood-lifter.

It's more than competently done but my sole criticism of substance is the maddeningly constant flitting between present and past, and not just to where the 18 year-old son (Timothee Chalamet) is younger at just one stage, but to where he was five years old at one point and twelve at another - as well as several points where he had attained eighteen. We know that by this age he'd already started on drugs but was he as yet keeping it from his father?.....was he in a 'lucid' period?.......had he relapsed?...... I quickly became confused as to exactly where the 'present' was, having to keep looking for the amount of grey in his father's (Steve Carrell) beard to anchor me in the stage we were at - something which became increasingly tiresome. His father himself had been not unknown to drug-taking and had assumed that if his son was on anything it was 'only' marijuana. However, when it becomes clear that he's on crystal meths, the senior one, recognising the perils, cannot hold back and tries to persuade his son to get professional help. Hardly surprising that the younger one resists (predictably fiery and sweary exchanges between them) - and when he does agree he keeps absenting himself from the institutions into which he's been booked, going missing and leaving the father to try to find him time and time again.
The son here is the child of Sheff Senior's unsuccessful first marriage, and he's not slow in accusing his first wife of not taking a greater share in her son's upbringing. Meanwhile, he now has two further small children in his second marriage to watch over.

It's more than a merely 'capable' film but it really is unremittingly on one grave note. It's significant that the longest musical item on the soundtrack is towards the end, a significant excerpt from Gorecki's Third Symphony - subtitled 'Symphony of Sorrowful Songs'!
Incidentally, when I first heard of this film I thought of the John Lennon song of identical title (written for his and Yoko Ono's only child together, Sean) - and the film does indeed acknowledge that source, one assumes it being the inspiration for the film's name.

Belgian director Felix Van Groeningen elicits faultless performances from the entire cast, though I suppose that it was he more than anyone else who made the decision to have all this confusing flitting back and forth all the time which certainly wouldn't have been in the written memoirs. I'd have so much preferred a more straight-lined narrative continuum.

It's a bit of a surprise that neither of the two leading actors have been nominated for Oscars in this film, though Chalamet gets a BAFTA nod for 'Best Supporting Actor'. I thought Carrell was no less deserving, and with this role he confirms (again) that he is a serious dramatic actor of the first rank.

It's a story that doesn't lend itself to light-hearted moments and those you certainly do not get at all. Despite that the film's not over-burdensome. It's buoyed up by hope for the young Sheff's future which you know is not in vain because we're aware that he still survives...............6.5.