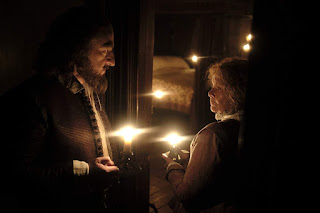 You know, against my expect-ations, I found this pretty good.
All you bardolaters (like yours truly) will recognise the film's title as being Shakespeare's own alternative name for his late play 'The Life of King Henry VIII',  a huge claim surely intended as ironic. In the same vein, Kenneth Branagh (as on-screen playwright in this as well as director) and writer Ben Elton have created a drama based unusually (and uniquely?) on the last three years of W.S.'s life - obviously using a lot of conjecture to fill in details. It works well.
Btw: Contrary to still widespread belief, a great deal is known about his life, in fact more than most famous personages of the 16th/17th centuries. The big mystery remains, however, is what he did between leaving school (where he didn't excel) at the age of fourteen and starting to write plays some years later when a young adult - theatre pieces yet flawed at that early stage of his career, and nowhere near the mastery he was later to attain, but with that spark of true genius bursting through occasionally. The gap in our knowledge of what he did in these missing late adolescent years has fuelled speculation which assume that with no evidence of studious learning and experience he could not have written the plays which bear his name. However, we won't go there now - so back to the film.

It's London 1613, and he's just witnessed the accidental burning down of his beloved Globe theatre. He returns to Stratford-on-Avon to the family he'd forsaken and lost contact with -  older wife Anne [nee Hathaway] (Judi Dench in what must be coming up to her 1,000th film!) and live-in daughter, Judith, now approaching thirty. He's racked with guilt at the death at the age of ten from plague, of his only son, Hamnet (Judith's twin), a couple of decades before and not seen his family since hearing of the demise.  His first meeting with his wife is a cold one because of his lengthy absence without news, but it thaws a bit over time. More problematic is his petulant grown-up daughter who accuses him of wishing that it was her who'd died rather than a son who could have carried on his legacy. His silence at the accusation speaks volumes.

Shakespeare busies himself with the construction of a garden in the vicinity of his dear son's grave, sometimes with the help of his ageing wife.
A key scene in the form of a fireside chat just a few minutes long, is his meeting through a visit after many years from the Earl of Southampton (Ian McKellan), the supposed addressee - at least as per this film - of the greater number of the Sonnets. It's a beautifully constructed talk between just the two of them, in which Branagh recites from memory one of the sonnets (#29) he'd written in praise of the then young man, and a few minutes later the Earl repeats the entire poem back to him word-for-word, though this time with inflections subtly varied.

It's a sumptuously shot film, both for the busy scenes within the small town and in the countryside area around which the writer resides.
There's the sporadic breaking out of religion-driven (Puritan) intolerance coming to the fore, as there had been in one form or another for the three-quarters of a century up to then.

Branagh sports a prominent, almost-hooked, nose for the part, not something we've come to expect from the assumed portrait we're familiar with, though I dare say it can be excused.
It's a leisurely paced film, not over-laboured, but replete with pregnant pauses and silences.

I was semi-prepared to give this film a critical roasting for its anticipated inaccuracies. However, although I might know a bit more about the playwright than your average cinema-goer I almost certainly don't know more than Branagh himself and, probably, Ben Elton too.  In that light although I could point to at least a couple of dubious 'liberties' taken it would be churlish to go to town on them when the film relies heavily on director's licence to embellish and bend the facts. I can't argue with that.
A 'must' for Shakespeare nerds, one I really liked...........7.