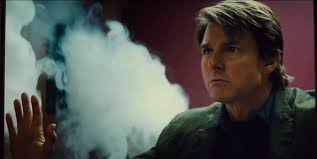 There's been a dearth of films worth stirring oneself for lately but this major release always held the promise of superficial thrills in the manner of previous in the series. And this it delivers - brash, noisy, almost unintelligible plot (but does it matter? Not really) - and, dammit, it's pretty exciting. One of those 'leave-your-brains-at-the-door' films, and no worse for that.

Cultist Tom Cruise does his Superman act as FBI agent Ethan Hunt again, aided by miniaturised computer gadgetry and aps galore (not to mention his own physical prowess and skills), assisted by the welcome, uplifting presence of Simon Pegg as his MI6 partner. Then there's Rebecca Ferguson (whose first major screen role this appears to be) - as an enigmatic side-shifting agent (or is she?) with all of Hunt's skills and sharing his ludicously unerring firearm accuracy in which, unlike their opponents, they score a bullseye with every shot. Hunt and Pegg are trying to find out who is at the root of a nefarious international organisation called 'The Syndicate', bent on hijacking the world's finances for their own dastardly ends. In addition there's Alec Baldwin and Jeremy Renner as FBI big-wigs, never quite sure of how far to trust Hunt, and both practically soiling their pants in the process, especially the former. Another 'biggish' name is Ving Rhames who, if he gets any broader, will soon be a human walking rectangle!

Most of the film takes place in London (that's England, we're informed), with a very short early sequence in Havana (Cuba!) and more substantial episodes in Casablanca (Morocco - including an extended car chase through the narrow streets and alleys in broad daylight, with not a soul about!) and Vienna (yes, that's right, the Vienna in Austria). The latter is a very entertaining section at the opera (where I've actually been) during a performance of Puccini's 'Turandot', the music cut and pasted about, but crucially including, what else, but 'Nessun Dorma'. Aficianados of Alfred Hitchcock films will note the resemblance of this scene to the climactic Royal Albert Hall scene in 'The Man Who Knew Too Much'.
As required, the London scenes had to include a number of the usual touristy backdrops. I thought the inclusion of the Tower of London was an interesting and unusual move but, sadly, the location wasn't exploited at all.

The film's director (and writer) was Christopher McQuarrie, probably best known for his screenplay for 'The Usual Suspects'. He does what one would expect here, without blazing any trails.

The film passed a Summer's afternoon pleasantly enough, and if you like this sort of mindless, forgettable stuff it'll be right up your street. Importantly, I don't regret the expense and time I invested....................6.