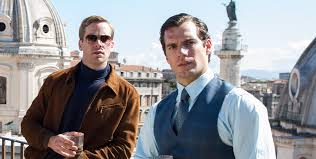 This is a story based on a rebooting of characters from the generally well-regarded American TV series of more than one hundred hour-long episodes which started transmissions in 1964, Henry Cavill here taking the suave, urbane, unflappable Napoleon Solo role (originally played by Robert Vaughn), and Armie Hammer as his Russian sidekick, Ilya Kuryakin, a character of fierce loyalty created by David McCallum, here much more shaded with a level of mistrust between the two of them which keeps on re-surfacing.
We also have Hugh Grant as Commander Waverley of British Intelligence (Leo G.Carroll in the TV series) who has a rather more hands-on role than his earlier TV counterpart, where he'd been reduced to little more than uttering wise words and bon mots from his H.Q. ivory tower.

However - and I do need to say this before going further - I found this an unexpectedly dull film! Unexpected, particularly because it's directed by none other than Guy Ritchie, whose trademark is non-stop action punctuated by scenes of graphic violence, sometimes sustained to inordinate length. There is violence here too, certainly, but it's much more toned down from his usual style.

The story starts in Berlin at a time when it was divided into sectors, the Russian quarter divided from the other three by heavily guarded fences and a 'no-man's land', before the Wall had gone up. American agent Solo and Russian Kuryakin, pursuing each other as enemies, are thrown together and find they have to work together because of an agreement between the Russians and the West to foil a megalomaniacal Nazi plot intent on taking over the world. This is, in fact, the back story as to how the two main characters are found to be in an unlikely partnership, nearly all of which was dispensed with for the duration of the TV series, though it has a high strategic importance here.
After Berlin the action moves to Italy where it remains for the rest of the film, in Rome and off the Italian coast. There's the expected involvement with Italian hoodlums as well as teasing from female, power-hungry personages - and a climax drawing in warheads, both conventional and nuclear. It's all very 1960s, cold war, sub-James Bond-style. In fact the TV series, which I generally found more compelling than this film, was one of several of the spy genre in various guises to emerge out of the the popularity peak of Ian Fleming's Bond novels - and the concept, looking dated now, doesn't wear very well when trying to recreate it for 21st century viewers. (I do wonder whether much of the audience will know sufficient about this period of history anyway - or have even heard of the 'Cold War'!).

Although I'd watched the series back in the 60s (in black and white, of course, though later episodes had been made in colour) I was never a really avid fan. It did used to pass away an agreeably entertaining hour on Friday evenings at a time when there were only two channels to choose from. It was also decidedly 'family' viewing, which this film is for only part of the time.
I heard Hammer saying that both he and Cavill had never seen any episodes of the original series. (In fact, I think he said that they'd never even heard of it - which is not so surprising in that it has, rather unfairly I'd suggest, dropped out of collective memory).

It could be that the fault of the film lies in that to me none of the actors on screen (and several off-screen crew too, I'd surmise, including Ritchie himself) seem to have their hearts in it.  There's little flair to the acting, directing or script. Even the few attempts at some dry, sardonic humour largely fall flat.

Btw: For those who didn't know (and I had to look it up to remind myself), the acronym U.N.C.L.E. = United Network Command for Law Enforcement - which in today's political contexts sounds almost quasi-reactionary.

This is another of those films where my opinion is out of step with that of the majority which, as at now on IMDb, give it an average rating of 7.6. I can't go anywhere near that score. I'd hoped that this film would have delivered more - and I don't think my verdict was solely affected by my remembering the TV series on which it was based, though maybe my opinion just might have been a wee bit higher had I not been aware of its origins.
I've seen nearly all of Guy Ritchie's films, and out of those I think that this one is his least satisfactory to date. I can only award it a disappointing..................3.5.
Posted by Raybeard at 07:01