Film: 'The Diary of a Teenage Girl' 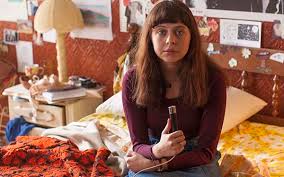 San Francisco, 1976.
15-year old Minnie has her first sexual experience(s), she being played by the actually 23 year old, English actress, Bel Powley - and, I must say, making a most convincing depiction of that age, as well as her acting American. (She was also very recently seen as a Princess Margaret of similar age in 'A Royal Night Out').

Needless to say, things get complicated from the outset when her mutually-attracted partner is her mother's (Kristen Wiig) live-in boyfriend (Alexander Skarsgard), he being a fair bit more than twice her age.

Minnie's sexual awakening is the cue for several such 'experiences' (fairly explicit in a 'soft porn' kind of way) - and not solely with the man who is, in all but name, her 'step-dad'. All the while, her coke-snorting, heavy drinking, chain-smoking mother is oblivious as to what's going on. Minnie, meanwhile, is recording her thoughts onto tape - from which you might be able to guess how the film's climax comes about.
Minnie is an aspiring and talented cartoon-illustrator, a good excuse for the screen at certain moments briefly to feature animated figures and patterns in quite impressive and entertaining ways.

I was afraid that the story might feature sequences of cloying sentiment but it does largely avoid these. However, although the film's central focus on Bel Powley's character is reassuringly very strong, I was wondering at several points whether this Minnie was portrayed as a bit too emotionally self-controlled for these watershed moments in her life's learning and development.

First time director, Marielle Heller, is also the film's co-writer, based on a novel by the other screenplay writer, Phoebe Gloeckner. Heller does a pretty good job and all the acting is of high quality. Such soundtrack as there is is basically (too loud for me) rock tracks of the era, played as part of the story's incidentals.

It's a star vehicle for Bel Powley who deserves praise for her portrayal of someone so much younger than the actress actually is. However, in the end I was left with a general feeling towards the whole film of "So what?"