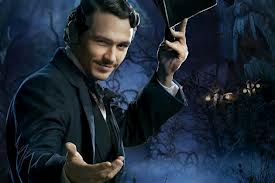 Feared I'd be giving this the thumbs down but it turned out that I really liked it.
Probably wouldn't have bothered if it hadn't been for the presence of James Franco who, though not everyone's idea of eye-candy, in my books works an alluring presence in any film - and he has such a beguiling smile too.

A supposed prequel to you-know-what (which has, incidentally, never had particularly great appeal for me) this film depicts the arrival of the self-absorbed Wizard in that land - which has been long anticipated by its inhabitants - and the meeting and confrontation with three sister-witches, one of whom is transformed into the Wicked Witch of the West in the story that we all know. Through his battles the Wizard is torn between revealing that he is, in reality, not the omnipotent figure everyone expects him to be, and trying to maintain the illusion that he is indeed this all-powerful figure for as long as possible. The film only gets saccharine-heavy at two or three points, notably in the closing moments, but pleased to say that otherwise sentiment is kept largely at bay.

I thought the 3D special effects were outstanding and are exactly what a fantasy like this needs. Performances were all good. Story also pretty good but the biggest let-down for me was the utterly banal script. Not one single witticism and not one memorable line. I'd have thought that the premise of this film would have cried out for self-regarding comments or (implied) winks at the camera  - particularly for the delectation of adults who are familiar with the 1939 film, though I am aware that for copyright reasons these film-makers had to tread very carefully in avoiding overt reference to the much earlier work (though we do get the Munchkins, flying monkeys - well, at least one of them - the Yellow Brick Road, the Emerald City as well as the aforementioned Wicked Witch). But I'd have thought there'd have been enough writers around to have come up with something to raise a knowing smile every now and then. If there were any, I missed them.