Film: 'MEA MAXIMA CULPA - Silence in the House of God' 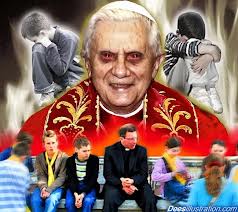 A documentary reporting the Roman Catholic Church's record of not bringing child-abusing priests to account, both within the Church itself as well as its failure and reluctance to notify national and local police and judicial authorities.
It's a film to make any reasonable-minded person yell with anger, weep with frustration and, more than once, just laugh aloud at the sheer pig-headed stubborness at Church authorities preferring to turn a blind eye, particularly in the Vatican itself - not to mention the personal connivances of Popes John Paul II (shortly to be elevated to 'sainthood', should he work the necessary single miracle required - but I'm quite confident he'll oblige. This requirement has probably already been achieved many times over!) ) as well as the collusion of Benedict XVI who, as Cardinal Ratzinger, was appointed as 'paedophile-investigator-in-chief '.


It's only a few days since I became aware of this film and immediately wanted to see it, but knowing that it would never get a nationwide release, had resigned myself to its being shown on a single screen somewhere unreachable in London, after which it would probably disappear - and perhaps show up in the middle of the night on some satellite TV channel. So you can imagine my surprise on finding that it had been booked for just two screenings in nearby Brighton. So today I went, and was reassured to see that it was well-attended too. 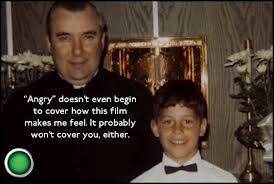 The principal focus of this documentary is on St John's School for Deaf Boys, Milwaukee, and the abuse of around 200 boys by just one resident priest, Father Lawrence Murphy (above), starting in the 1950s and continuing at least up to the 1970s. A few of the surviving boys (now, of course, considerably advanced in years) tell of their experiences in sign-language (voiced over by some celebrities -  Ethan Hawke, Chris Cooper and others) such as when Murphy used to regularly creep into the dormitory at night and select a boy to masturbate. During daylight hours he'd even commit the act in the confessional during confession - the partition 'window' being usefully wider than normal so that he could read their sign-language - or, later, in a closet, which he kept especially for that purpose. (Many years later, after admitting his behaviour, he justified his conduct as 'helping' the boys by getting them to manifest their natural urges! - "All boys do it!") His victims talk of their exasperation at their failure in getting nuns (working at the school at the time), other priests there, and even their own parents to believe them. On those very rare occasions where Murphy was confronted his vociferous denials were accepted as sufficiently incontrovertible proof that the boys must have been inventing malicious stories about him.

Then the film widens out into child abuse by R.C. priests generally, the dragging of feet by cardinals (if they do anything at all) when told of certain of their number - while the number of targets of complaints grows and grows - and of the Church authorities doing all they can to prevent such stories getting out, requiring victims to sign legal documents that they will never again accuse the perpetrators or defame the Church's hierarchy , on pain of excommunication - which used to be a really big deal in former days, thankfully much less so now.

It details how corruption in this respect goes all the way up to the Papal institution itself and with at least one paedophile cardinal within the then Cardinal Ratzinger's own circle. When challenged about this cardinal's employment, as Ratzinger is about to get into his limousine, his benign, avuncular mask slips, his smile rapidly fading as he tetchily tells off the reporter that he can't talk about it now - while his furious face says "How dare you mention it!"  So when then? .......

One of the things that constantly baffles me is seeing the many thousands of pilgrims and worshipers in St Peter's Square, ecstatic tears of devotion running down their cheeks at being in the presence of such a 'Holy Man of God'. I can't help wondering if their faith would be as unstinting if one of their own young relatives, perhaps their very own child, had been abused by a priest, and the offender then allowed to slip, scot-free, into obscurity or, worse, continue as before as though nothing had happened. I can only think that they are incapable of contemplating the dreadful possibility that their Church could ever do anything wrong. That would call into question their whole belief structure and mean that they themselves had been mistaken, for probably their entire lives - just too awful to think about!

One of the most nauseating facts in this film was hearing that when the above Fr Murphy, ailing and inconspicuously retired by the Church into a remote country location, with one faithful female housekeeper (from that same deaf school), he hears that finally and unbelieveably he might actually be called to give an account of his conduct by the Vatican (due to unceasing pressure and publicity) he writes Ratzinger an obsequious letter pleading to be allowed to live out the remaining time of his priesthood quietly and with dignity(!) - and, hey presto, the case against him is dropped - another miracle!. He drops dead shortly afterwards - in a gambling casino.

It seems the only thing that gets the Vatican moving to bring the perpetrators to justice (though only before the Church's own canon law) is not so much sympathy for the victims of abuse, despite their maintaining it, but the fact of the crippling expense of having to settle so many claims for damages with all its related dire publicity. It's crystal-clear that the Church authorities have far, far more compassion for the abusers than the victims. In fact their whole attitude is that though such happenings were 'regrettable', it really is time to move on now, and as quickly and quietly as possible - while keeping fingers crossed that both victims and abusers will speedily die off (though I think it be wishful thinking to suppose that it's not still going on right now).
The comment is made that those parts of the globe where the R.C. Church is currently growing strongest is in the developing regions of Africa and Latin America, societies which would find it hard to accept that such activity could ever take place, but even if it does it's more of an American and European phenomenon. If the next Pope comes from one of these third-world areas I shouldn't be at all surprised to see that same attitude reflected among his first pronouncements and instalments of Papal Bull.

I can actually still see and comprehend the mindset of the Church in refusing to accept that its own institution could possibly be at fault in having given arise to these sets of circumstances. Certainly when I was being educated in the 1950s and 60s, criticism of the Church was considered to be absolutely beyond the pale. Stealing, adultery, even murder, could all be forgiven through sincere repentance of the 'sinner' - but to attack the Holy Mother Church was a wanton, violent act against the body of Jesus Christ himself! There could hardly be anything more serious, short of assassinating His one true representative on earth, the Holy Father.

This is a film which is maddening, sickening and yet sometimes bleakly funny. Would that everyone could see it - though I fear that the vast majority of the audience will already be among the 'converted' (if I may use that word in this context). For those who find the very thought of the R.C. Church ever being in error as too horrific, well, they aren't even going to give this film the slightest chance of being heard. Great pity.

(Because of the nature of this film, which is hardly an 'entertainment', I'll refrain from giving it any score).