She who gives an extra polish to the word 'lovely'. 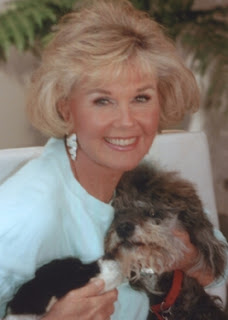 Doris Day was an integral part of the soundtrack of my infant and pre-teen years. How clearly I can recall every one of her dozen or so hit records, even her very first British hit in November 1952  - 'Sugarbush'  (with Frankie Laine). Actually this was at the time of the first ever official British 'pop' chart - Number 1 was 'Here in my Heart' by Vic Damone, which I also recall. 'SugarBush' reached number 8.
I mention this beautiful lady today because tonight on one of our BBC channels there is a three-hour D.D. splash. A documentary with film clips, a 1992 interview of her talking to Betty White (of 'Golden Girls', of course) which I've never seen, and a 1971 TV show of hers, with guest stars Perry Como - and Rock Hudson!  But, dammit, the Doris-fest starts at 9 p.m., a time when I'm preparing for bed.
I'm an early retirer (this morning getting up at 3.15), so if I can't stay awake tonight I'll have to watch the progs on the computer later. Fine, but it's never as comfy as watching TV. (Being on a digital channel I can't video them.)
The Divine Doris reaches 90 next April. (Or is it 88? - the sources I look at differ.) When her time is up I know I'm gonna weep buckets. She was - and still is - mine!

Growing up as a devoutly-practicing Catholic boy, it seemed that from about the age of 11 or 12, whenever I went to confession I was owning up to having 'impure thoughts'. I never ever got round to confessing actual acts, except just the once when I got so tongue-tied and stutteringly incoherent I was berated by the priest for not being 'explicit' enough. He wanted to know ALL the details - sitting there behind a wire grille in his little darkened box. (Any further comment is superfluous!) After that humiliation I never dared attempt verbalising any 'impure' actions again. (Oh, the mortal sins that deliberate omission must have brought down on my head, further compounding the 'evil' of those unmentionable acts! And it gets even worse. I was still going up to receive Holy Communion every Sunday - so that my family and school mates wouldn't ask questions about why I didn't go. Horror upon horror! I reckon that when I meet my Maker, being condemned to an ETERNITY in hell still wouldn't be long enough.) Anyway, what I was going to say was that whenever I mentioned these sinful thoughts, my penance, in addition to being instructed to say one or two 'Our Fathers' and a few 'Hail Marys', was always to pray to the Virgin Mary to deliver me from this wicked temptation, which I always did, but which never seemed to work. I can't help feeling that a more efficacious target of my prayers would have been to Saint Doris, who at least she was easier to picture. It certainly couldn't have been any worse. (Sorry to have taken so long to get back to the subject of this blog. I admit the connection is tenuous, to say the least.)).

Btw: I remember when there was talk about the filming of 'The Sound of Music', around 1962/63, they'd narrowed down giving the role of Maria to either Julie A. or Doris Day. If they'd gone with the latter I wonder how it would have looked and worked out. I don't know if their respective ages had anything to do with the final choice (Doris was elder by 13 - or is it 11? - years). I imagine it would have had quite a bearing. But it's an intriguing thought.


And now, my friends, let's have a chorus of a song whose lyrics resonate with a lot of us:-