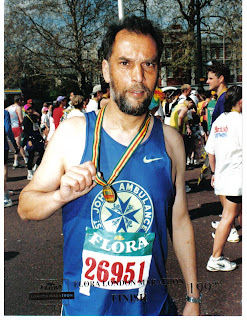 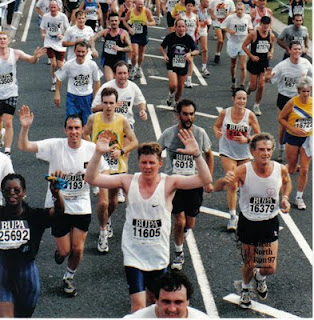 The pretext for posting these pics is to illustrate my short-lived hobby of 'serious' running.  - and besides, my late mum and my sister are the only ones who have ever seen them.
Both events were done when I'd turned 50 the previous year, the first showing me after completing the London Marathon (my one and only) and the other (with me in the centre) the 'Great North Run' on Tyneside - still the biggest annual half-marathon in the world, in terms of number of participants. I'd only been running for less than 5 years before 1997, but since then there's been a spectacular fall-off in capability. So far this year I haven't even managed to run a single half-mile without having to stop, hee-hawing loudly for breath. My doctor tells me, with a self-satisfied smirk on his face (which I'd dearly love to rub off somehow) - "Ah, don't forget that you're growing older!" Some comfort, as though I didn't know that myself. The troubling part is that the deterioration in performance was so rapid from about 1998 onwards. In that particular Great North Run I'd finished in 8,450th place, which, though sounding dire, was actually well in the top third, and which, even though I say it myself, isn't all that bad for someone of my age at that time who'd only been running for a very few years.
Anyway, I'd be deluding myself if I thought that those days could ever return, but it really is a great disappointment. I haven't dared take part in an official event since about 7 years ago when I participated in a 10-miler, with maybe just a hundred runners, coming not only among the last 10, but actually beaten by a guy, doing the whole course pushing a woman in wheelchair! But he was very muscular - at least that's my version!
So I stopped myself attempting such follies again, just to avoid self- and public embarrassment. Besides, these days I doubt if I'd ever be able to complete the course, even at a slow jog. Oh well, it seems that my glory days are truly over.
Posted by Raybeard at 07:36