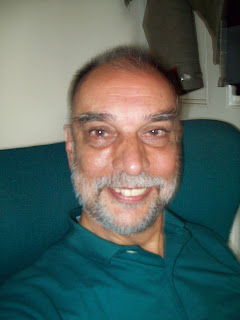 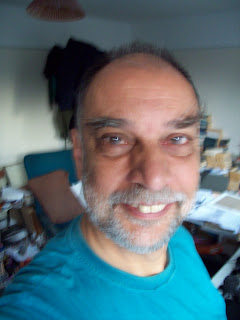 When visiting my big sis last month she gently chided me that when I smile, particularly in photos, I never show my teeth. I could have reminded her of the probable origin of this; but I refrained, even though she would have remembered it.
I'd have been about 9 or 10 years old and had one of those kiddie scooters, riding it everywhere with gusto. Then one day, in mid-hard-ride the front wheel came off - and I went literally arse-over-tit right over the handlebars, and bit the road. Not only was my chin deeply cut but one of the front teeth got chipped, not completely, but it did take a small chunk out of the front of it. With time that gap in the tooth's enamel turned a very conspicuous brown, only covering about 5% of one of the front teeth, but a blemish significant to be noticed by anyone I talked to. Growing increasingly self-conscious about it, I started showing my teeth as little as possible till it became a habit to keep my mouth closed unless absolutely necessary.
That was the situation right until my mid-30s. All that time I didn't visit any dentist even once. I was too frightened at the thought that they might want to extract all my teeth, something which actually happened to my late elder brother when he was also still just in his 30s. Eventually I did go and the situation wasn't anywhere near as bad as I'd feared - one extraction, maybe three fillings - and he capped that front tooth. Ever since then I've made dental visits regularly and never had any serious dental problems since. But the habit of keeping my lips shut has become hard-wired.

But back to the smile. Here are a couple of pics which I took yesterday and this morning, chosen out of a total of eight attempts, because it's so hard to smile on demand without showing the effort underneath. (When I need to smile I think of either cats playing or of Laurel & Hardy.)  I think the one on the lower right above (this morning's), is the better of the two.

By the way, I had an appointment with the dental hygienist yesterday, a regular event which I dislike even more than a visit to my 'proper' dentist. In my experience all these hygienists appear to be she-monsters who seem to take out their own life's frustrations on you - tug, scrape, yank, poke, jab! This one yesterday was bizarre. She kept asking me questions while working on my mouth - and not just questions that required a 'yes' or 'no' answer - which alone would have produced an indeterminate 'Aaaaaah!' no matter what you wanted to say. With sharp instruments in one's mouth, as well as that saliva-suction thingy, you can't even nod or shake your head. But there was no stopping her. She would go chuntering on:-


Anyway, that's all over for a while. But don't expect to see my gnashers again for some time!