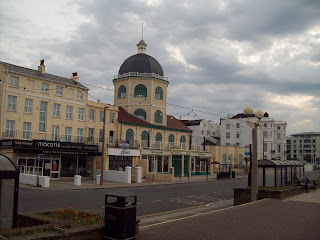 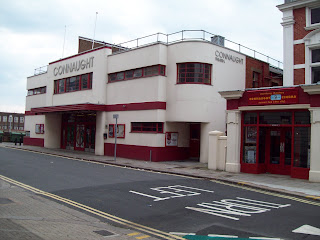 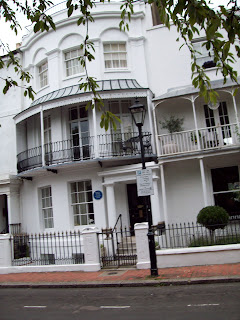 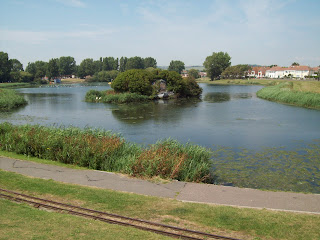 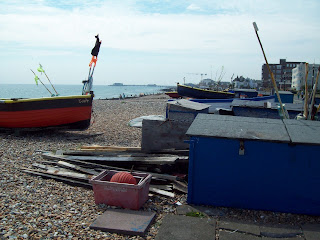 In order from top:-

a) The domed building is the 'Dome' cinema on the sea-front. One of this country's first, it started operating in 1911. It still has one of the old-style long auditoria and a few years ago a second small screen was added upstairs. I visit here occasionally, but the films shown tend to be only the big blockbusters. If I want to see a quality art-house or non-English language film I've got to look elsewhere.

b) The Connaught is Worthing's main theatre, starting as a cinema in 1914. In 1935 it was converted to a theatre and since recent years it now alternates between live theatre and films. A second cinema screen was added in the neighbouring property, which, now and again, shows 'minority-appeal' films. But for regular art-house films I've got to travel to nearby Brighton, which I do nearly every week.
The last live show I saw at the Connaught was 'Cowardy Custard' a couple of months ago - a compilation of Noel Coward songs with Dillie Keane and 'Kit & the Widow'. And excellent it was too.
I also the final 'Harry Potter' here a few days ago. I make no further comment, though I could. Well, okay then. In terms of my own personal enjoyment - 3/10.

c) Harold Pinter lived here! True, only from 1962 to 64, but it was also the very place where he wrote what must be one of his and this country's greatest 20th century plays - 'The Homecoming' - bleakly and disturbingly funny. Pinter was and is one of my 'gods' and even now I feel privileged to know that he lived and breathed in this vicinity, just 10 minutes walk from where I'm living. He gave a BBC radio interview in which he talked about living in Worthing and taking his dog for a daily morning walk down to the sea-front. Awesome stuff!

d) Brookfield Park on the far eastern edge of the town. The picture was taken the three days ago on what was to be the last day of the current hot spell.

e) Looking westwards with Worthing pier in the distance.
Posted by Raybeard at 23:41