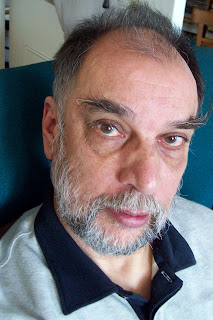 Yours truly - taken yesterday shortly after hearing the appalling news from Malawi, which still weighs heavily inside me. You'd think that even Christian leaders would be dismayed and be speaking out against the obscene sentences. Perhaps they are - but I think that the local ones at least would be too afraid of bringing down the wrath of their own congregations. Just hearing the viciously hateful comments made by people outside the courts, as well as the judge, fills me with despair.
But on the other hand, and to raise the spirits, wasn't it great to hear what Laura Bush had been really thinking on LGBT issues during those eight dark years when she was First Lady? I'd always seen her as a robotically obedient 'Stepford Wife' but now it seems she just might have been instrumental in restraining the worst excesses that 'Dubya' could have been influenced to enact. Or am I being naive - and should we withhold any gratefulness to her because she didn't do still more?
Posted by Raybeard at 08:09