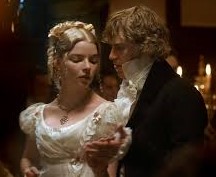 On first becoming aware that this was being released, my reaction was one of "What! Do we really need yet another version so soon after the last successful one?" Then I was dismayed to find that the previous which I'd really liked was more than a generation ago - 1994! (You may recall it, starring Gwyneth the Goop herself in the title role, in those bygone days when she was yet a respected young actress with potential, before she started telling us all how to improve our lives). That aside, how does this newie compare? Rather unfavourably, I'd venture to suggest.

Based, of course, on the renowned Jane Austen novel (why the film's title has a full stop/period after the title name is unclear) which I've read two or three times and admire.
Set in the early 19th century, I found this version somewhat long-winded and occasionally even stagnant, though I must say that it really is sumptuous to look at throughout, costumes, scenery and landscapes (filmed in Gloucestershire) all beautifully delivered to screen.
The cast had only three names with which I was familiar, one of which is the ever-reliable Bill Nighy (yet again) as Emma Woodhouse's father. She herself is played by Anya Taylor-Joy  who actually does look the part of the snooty, interfering, superiority-complexed young lady whose own romantic intentions remain off-limits for everyone but her. Btw: Why is Nighy, in just about all the many films he's appeared in, only ever given 'bit' parts, of which this is another one? He's never given a chance to demonstrate his full potential, and he's always so watchable.
The male lead of George Knightley is played by one Johnny Flynn, another name new to me - hovering around, not making commitments, scorned by Emma herself (at least publicly) though anyone not familiar with the story can guess how it's going to end.
Flynn is an actor who mystifies me as to why he should make young ladies' hearts turn all a-flutter - despite us getting a full couple of seconds shot of his undraped entire rear side (Ooh! How daring!" - Pah!) On the other hand I can see why Anya Taylor-Joy would be alluring to a hetero-male gaze - a bit of a beauteous, emotionless 'challenge' wrapped up as she is in all that impervious 'ice' which needs chipping away!
Miranda Hart is a pleasure to watch as the talkative, middle-aged spinster acquaintance of Emma, while we all wait for the infamously cruel put-down of her by Emma herself in front of the picnic party, and whose execution is here handled very well, Hart herself heart-breaking in her crushed reaction to the callous public humiliation.
The only other name I recognised in the cast was Rupert Graves, though on screen I have to admit that I barely recognised him.

Now I must reveal that for me one of the very worst aspects of this film is the mood-directing background score, telling you how to react - in just about every frigging scene! Right from the the very start we get these jaunty tunes under the dialogue, presumably meant to put - or to keep - a smile on your face. Hell's bells! I just wanted to yell STFU!!!   Let the words do the talking! To be fair there is, later, a little variety with a group singing a capella 'Steeleye Span' style. But, dearie me, all so extraneous!

Director Autumn de Wilde (now there's a name for you! And btw, it's a 'he') whose first full-length feature this happens to be (Gawd help us!) pulls out all the stops (too many!) to give this the treatment he feels it deserves. However gorgeous it is too look at - and it really is - it's all a bit laboured, the concluding half hour or so especially I thought really dragged, almost fatally. Oh, and there is, naturally, the 'regulation' period-piece dance scene!

Apart from two or three of the more mature cast members I think the film would be improved without any sound at all, maybe with just subtitles. Crucially however, I think this film is a mis-step - though it hardly needs stating that my opinion is that of just one individual. I feel we don't really need yet another cinema version of this tale - at least not yet..............5.