Film: 'A Beautiful Day in the Neighbo(u)rhood'. 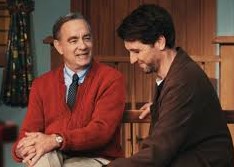 If this film was trying to replicate the amiability of the American TV personality it features, one Mr Rogers (played by Mr Nice-Guy himself, Tom Hanks - perfect casting!) then there's little doubt that by and large it succeeds. However, I'll be one of the overwhelming majority of non-Americans who've never even heard of the person or his half-hour children's TV programme (broadcast 1968-2001) in which he explains life and its problems (and solutions) in easy, non-preachy, laid-back style to children towards younger ages, with the aid of models of a miniature town and glove puppets. However, I can't help feeling that being familiar with the original personality would be a marked advantage in appreciating this film.

Cardiff born Matthew Rhys plays an investigative reporter working for 'Esquire' magazine. with troubles in his own life, particularly with his hovering, loutish father (Chris Cooper) from whom he seems to have inherited some violent traits. He's only recently become a father himself and his fractious relationship with his parent (mother deceased) threatens to disrupt the loving and mutually respectful situation between him and his wife (Susan Kelechi Watson).  It's at such a turbulent point in his life that he's given the assignment of writing a profile of Mister Rogers, a task he's reluctant to take on, entailing, as it must, meeting the said TV personality on several occasions, meetings which turn out to be more about the ultra-clean Rogers questioning him about his, the reporter's, own life rather than him finding anything of interest (no 'dirt' found) to write about the famous man.
It'll come as no surprise to learn that Mister Rogers helps Rhys' reporter character to learn about himself, strengthening his marriage bond which threatens at times to become argumentative, and bringing him closer to his ailing father.
Given the tensions which need resolving (the story is 'inspired' by actual events) there's a fair helping of sentiment to be displayed, though I was relieved to find that it just managed to keep on the right side of being too cloying. This is helped by not having one's emotions directed by too much background music - though there is one point where an unnecessary song appears, a ploy I just cannot abide!
Hanks' portrayal is very much a one-note depiction, the man is the same both on the television set when acting and in his own personal life (wife played by Maryann Punkett) which, I take it is what the original Mister Rogers was like. I found there was just a suggestion that the whole proceedings might start to drag a little, though it really doesn't to any serious extent. But there is one shortish, noteworthy scene in a restaurant between Hanks and Rhys which I found quite magical, almost hypnotic, in fact.

The film was shot in Pittsburgh (standing in for New York) and is rather good to look at.

Marielle Heller, in this her third cinema feature as director, executes this unusual, quirky tale most satisfactorily. Difficult to say how it could have been improved. I liked it...............6.5.