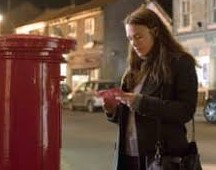 This had all the potential to be a cracking, good film, and it probably is were it not for one single fault in my viewing of it that was probably not due to the film itself, namely, the screen it was played on had its volume so low that 90% of the dialogue was indecipherable - a rare fault when the more usual complaint is that too many films are played so ear-splittingly loud so as to be on the verge of being unbearable. (You may have read of Hugh Grant's recent unhappy experience when he went to see 'Joker' - "unendurable!") It didn't help that 'Official Secrets' is such a talk-heavy film while the subject matter is a secretive one so that most of the dialogue anyway is delivered in hushed or whispered tones. When I'm unhappy about indistinct delivery of lines (which I regularly am) it almost always is because of one prominent member of the cast. But here it's the entire cast that one is straining one ears at so it's clearly not a fault of general poor diction. Great shame. I was in an audience of, perhaps, fifty, but at the end of a row where, if I'd got up to ask for the sound volume to be increased I'd have had to disturb quite a number - twice! No one else was doing it so I let it go. Only wish I'd gone to the usual single subtitled screening, but I'd missed that.

The film is based on the true story starting in 2003 in the run-up to the (Second) Iraq war, a story that was probably bigger in Britain than elsewhere, of an operative for British Intelligence at GCHQ in London - played by Keira Knightly, who can always be relied on to provide a sterling performance. She received surreptitious information from America that President 'Dubya' Bush & Co, with the connivance of Tony Blair and his cronies, are engaged in a secret campaign to gather incriminating evidence about some of the smaller United Nations Security Council members so as to blackmail the latter into coercing them to vote for a western invasion of Iraq in the wake of well-publicised and, as it turned out, fake stories about Saddam Hussein possessing weapons of mass destruction. The anti-war woman Knightly plays is married to and lives with an Iraqi Kurd (Adam Bakri). (Bakri is strangely placed well down in the cast list order although he occupies more on-screen acting time than most of the other characters). She decides to turn whistleblower and anonymously passes her information to 'The Observer' Sunday newspaper. The rest of the film relates to the attempt by British Intelligence to find out who leaked the story, her eventually admitting to it followed by the shameful threat of her husband being deported, and her being charged with breach of the 'Official Secrets Act', where she's defended by Ralph Fiennes. The principal reporters on the story at 'The Observer' are played by Matthew Goode, Matt Smith and Rhys Ifans. It's a very strong cast overall and they all grab and hold onto one's attention in turns, even if I couldn't always work out what they were saying.

South African director (and actor) Gavin Hood does a really fine job with his material here - he already directed the excellent 'Eye in the Sky' (2015). I don't agree with several reviews I've seen which have found this film wanting in suspense. I thought it turned up the tension most successfully in a broodily atmospheric setting, remarkable moreso when most of us who remember the story as it developed in the news knew of its eventual outcome.

I'll finish by rating this with a score much better than simply 'fair'. If I'd seen it and caught all the dialogue, or seen a subtitled version, I dare say it might well have ended up in my Top Ten Films of this year. However, as it is..............7.