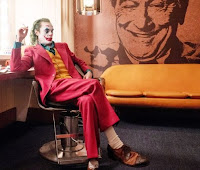 Just coming up from having been laid low with flu (bucket-beside-bed situation, where one entire day was spent with no eating nor drinking at all, only rising to feed the pussies) - and this was just 16 days after having had my annual flu jab, so don't anyone tell me that this was mere 'coincidence', I ventured out to catch this must-see feature.
It's courted controversy in that there is significant violence, much of it gun-related, though hardly much more than is seen in your average crime thriller. Also it meant visiting the particular screen where I haven't been since seeing there what is surely going to turn out to have been the most discomfiting film of my entire life - 'Midsommar' - which has invaded my mind for each and every day since I saw it three months ago - and, of course, I was sitting today in my very same regular seat. So all in all, not the ideal venue to have gone to in a still queasy state.

'Joker' wasn't even slightly the film I was expecting, involving the fleshing out in some detail of the background story to the villain who was to become one of Batman's arch-nemeses. Apart from a couple of mentions of Gotham City and none at all of Batman himself who, presumably, was yet to arrive on the scene as saviour, it might as well have been anywhere. Despite the name he adopts there is nothing amusing in the film from beginning to end, being solidily dark.
Arthur Fleck (Joaquin Phoenix) takes the title role with abundant flair, a professional, public clown in painted face and traditional outsize costume, first seen gyrating to music on the busy streets in order to attract attention to a certain store, during which he is set upon by a group of youths. It seems that this is just a routine part of his life, though other aspects are not so usual, in particular a 'condition' he has of letting out a piercing laugh at the most inappropriate moments. Once in the studio audience for a televising of a regular talk show hosted by Murray Franklin (Robert de Niro), his laugh attracts the attention of the host who calls him onto the stage, which gives him a taste of celebrity status, for which he soon craves more. Meanwhile, living alone with his aged and ailing mother (Frances Conroy) he embarks upon a romantically-inclined friendship with a near-neighbour (Zazie Beetz) in the same apartment block.
There are violent scenes and killings throughout, some forewarned, others not, yet the film manages to still make the title character one might have sympathy for - though if that is there it certainly wears thin or vanishes completely by the time the final half-hour comes round.

Praise has been forthcoming for the brooding, menacing background music of the Icelandic Hildur Guonadottir and I endorse it fully.

Director and co-writer Todd Phillips has best been known up to now for his three 'Hangover' films, none of which I saw, but I have little doubt that with 'Joker' he's reached his zenith, at least for now, though I hope he manages to go onto even greater accomplishments.

I'd find it hard to fault this film in any respect really - except that, at just over two hours in length, it does tend to show what a heavyweight it is, with no relief - and when was the last time that Joaquin Phoenix did not deliver an exceptional performance? I can't remember.

It's a film of considerable depth. If you go by first erasing all thoughts of Batman, I'm pretty sure you'll find it a rich and rewarding experience.......7.5.