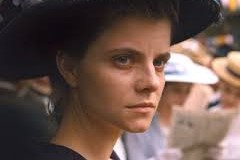 If this isn't the first film I've seen in the Hungarian language then I don't recall when or which was.
Set in Budapest 1913, in the twilight years of the Austro-Hungarian Empire, it's a story of a daughter of the wealthy married owners of a one time large and renowned hat store, both of whom died (murdered?) in a fire when she was a baby of two years old. She applies for a job in the very same store her parents owned and on giving her name she's met by direct hostility from all sides, current owners and staff - but she's not deterred, wanting answers to her many questions.
Trouble is, though in some ways this is quite a compelling film at least visually, I had so many queries as to what exactly was going on that I was well and truly lost for much of the time. I don't mind in the least those films that require the watcher to join the dots themselves to make sense of the storyline but in my case the dots were just too far apart to make for plausibility. It could well be that essential information as furnished in the subtitles was lacking, but I've no way of ascertaining that.
The young woman at the centre of the film is played by Budapest-born Juli Jakab, who maintains for much of the film a commendable equable temperament despite the many animosities aimed at her. There are a few violent scenes, most verbal but some physical too.
A curious feature is that there are a number of scenes which are so darkly lit, sometimes from back  (surely on purpose?) that one cannot see faces, so one, me specifically, doesn't know who they are. I assume that this was to give an 'arty' effect. If so it backfired, only giving rise to needless extra questions when I had so many without them anyway.

Director Laszlo Nemes, best (and only) known for his 'Son of Saul', not seen by me, directs with assurance here but if his idea is that any intelligent film-goer should be able to follow this then I must disappoint him, unless it's me who's particularly dim.

I can see how this might be rated a superior film but by being more nonplussed than I'd need to be for coming down on that side I can't make that leap. I might well have moved my rating up by a further half point were it not so, but reflecting my confusion I have to settle for a more lowly...........5.5.