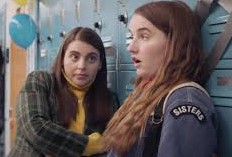 Paying the price for giving credence to numerous reviews full of praise rather than heeding my inner voice, this was as dire a cinema experience as I've had all year. On the surface it's the kind of film I'd normally steer clear from by a mile - worldly-wise kids (in this case two female teenagers on the eve of graduation) spouting forth attitudes regarding life and relationships of such perspicacity that they'd do credit to an adult of two or three times their own years.
In the event I was saved from much of my apprehension in that a lot of the dialogue, which I assume was intended to be quick-fire zany, was quite incomprehensible, delivered far too fast for me to grasp, at times in highly excited, even hysterical-yelling measure. How this film has received such warm notices is far beyond me.

Kaitlyn Dever and Beanie Feldstein are the two central characters who regret having 'wasted' so much time in their high school years (filmed in L.A.) in successfully working towards high grades when they could have been having fun, sex, going to parties and drinking and drugging themselves silly. So they determine to catch up on what they missed out on in one spectacular blow-out, essentially compressed into the one day and night on the eve of their graduation. Oh, what fun!

Their school chums are worlds away from the time I was at school. Gender fluidity is 'in' and most definitely 'cool' . As if to illustrate how tolerant things have become one could hardly move for ultra-camp young men flamboyantly sashaying their way from one group to the next over the dance floor  - or were they really all men? What the hell! This is 2019 when simply everything goes! No hostility in sight - not even one raised eyebrow!

The ear-splitting (for much of the time) soundtrack reflected the prevailing sense of hedonism, with intelligent conversation virtually outlawed, and most likely would have been indecipherable in any case.

Director Olivia Wilde (who has a considerable record as actress though in no roles which I can recall enough to have made an impression) here directs her first full-length feature. If her future projects are anything like this one I'd rather that she gave up now.