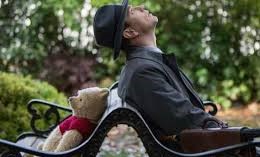 Hadn't particularly wanted to see this on first viewing the trailer, only to be later underlined by almost unanimous tepid reviews. However, wanting to break a three-week hiatus of a Summer menu of kiddie films and inane blockbusters, decided to chance it. Bad move - and not solely because of this feature.

I never read the Winnie the Pooh stories as a boy or afterwards though was aware of the characters. (There was, of course, last year's release of 'Goodbye, Christopher Robin' which I saw and rated with a '5')

The augurs of an unfortunate experience were quickly evident in the large audience containing a high proportion of children aged 10 or under, mostly with their parents - including at least two babies-in-arms I saw. Annoyances grew when immediately in front of my designated seat sat a family of four, consisting of two boys with a mother who was, one might say, on the large side, holding in one hand a giant tub of popcorn to chomp on, phone in the other, she squeeeeeeeezed herself into the seat, while the boys shared a large vessel of coke (one assumes) - two straws, one vessel. Despite the request on screen to turn off phones, this 'lady' didn't - and every few minutes the blue light was being switched on and off - and she was far from alone in doing it. Then the younger of the boys, about 6 or 7, kept standing up for no apparent reason, making the seat go back with a clatter. And how many times in a one and three-quarter hour film does one need to have a wee? Three times? I kid you not. There may well have been a fourth, far as I know, as I left with maybe ten minutes to go, wanting to avoid the crush. (If I can manage to survive six hours or more with no discomfort, why can't others?)
All through the film, significant sections of which were hardly attention-holding for an audience of children, there was talking (not even whispered mutterings!) and, naturally, babies crying. And then there was the film itself..........

It's an odd story (this one not by A.A.Milne), set in London and Sussex and centring on Ewan McGregor as the adult C. Robin having (so the blurb goes) a 'mid-life crisis' relating to his employment and his marriage (to Hayley Atwell - underused) and his young, but (oh, so wise) brat of a young daughter - one of those kids who, you feel, would feel the benefit of a hearty slap.
The appearances of Pooh (with a most annoying, unvarying, 'poor me' voice) and his other creature friends (some exhibiting, very oddly, American accents) seemed to entertain most of the audience, but left me coldly unmoved. Plenty of rushing hither and thither didn't up the low excitement factor. I kept looking at my watch more times than probably for any other film this year.

Director Marc Forster ('Monster's Ball', 'The Kite Runner', 'Finding Neverland', 'Quantum of Solace') does what he has to do as though it's all rollicking good-natured fun. If that's what it was meant to be it missed me.
Animations are pretty good, I must say, Didn't notice anything visually that looked 'false'.

If I hadn't had the irritations and distractions around me would I have appreciated the film more? I honestly think not. Shan't be wanting to see it again and I'm not in the slightest bit curious as to how it ended in those final missed minutes......................3.