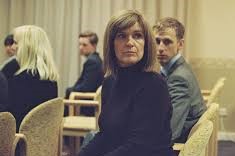 Off the top of my head I can't think of any film concerning Jehovah's Witnesses, though there must be some. Now we have two in the same number of weeks. Next week it's 'The Children Act' in which adherents' refusal to grant permission for a blood transfusion is central, and now we have this where the same subject is at least broached in the opening minutes before it goes into other territory.

Set in an anonymous north England town, it deals with a Witness' mother (Siobhan Finneran) single mother of two late-teenage girls (we're not told what happened to the husband), one of which, on becoming pregnant by her non-denomination boyfriend, is cast aside by the movement - though not in as brutal a way as we know happens in the Mormon 'Church'. Contact with her, even when the young father has deserted her and she's left alone with the new-born baby, is frowned upon, including contact from her mother who is told that the young mother can be welcomed back only when she wants to return and is "ready" as determined on examination by the Church's elders. Meanwhile, a newly arrived 'elder' (Robert Emms, looking alarmingly young for someone with that title) takes up romantically with the yet 'faithful' sister.

It's a refreshingly small-scale, modest film, at a mere 95 minutes. Quite involving too, but oh, how I'm disappointed that yet again so much of the dialogue, particularly between the two sisters, and occasionally with the mother as well, is lost in blurred, undecipherable speech. I realise that at my age my hearing faculties must be less than they were, though I can't fathom out why if it's so I haven't experienced it in other areas, such as listening to radio or TV or in normal face-to-face conversation. It's incomprehensible to me how these on-screen characters can talk to each other without firing a regular "Pardon?" in both directions. Well, of course they don't need to because they know the script! Do other audience members have the same difficulty and are just too ashamed to admit it - or is it really just me?

There's almost no histrionic behaviour between the characters, temperatures raised only occasionally and in fleeting manner, otherwise it's kept relatively subdued, mostly.
There isn't any sense of the Jehovah followers as being in any way 'monstrous', with no implied condemnation of their conduct - nor is there any 'preachifying' in their direction, the whole action being kept admirably neutral while showing in their Kingdom Hall meetings the importance of their interpretation of scripture.

This is the first full-length feature as director of Daniel Kokotajlo, and he performs the task well in unassuming manner.

I feel this would have merited a higher rating were it not for my single criticism of so much of the speech, particularly in the film's earlier part, being lost to me. Even so, it's worth a watch................6.