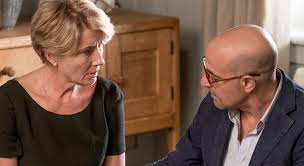 When I first saw the trailer for this I had exalted hopes. I've read half a dozen of Ian McEwan's novels, though not this one, and he's rapidly become one of my favourite living writers. (He also wrote the screenplay for this film)

Any film starring Emma Thompson is already a 'must', and when it has the added attraction of Stanley Tucci as second in the cast then there's absolutely no question of missing it.

Thompson is a High Court Judge in London whose remit includes decisions on some cases involving controversial questions, she having to observe a distinct dividing line between rulings in accordance with the established law of the land while keeping at arm's length varying opinions regarding the morality of such laws.
Her busy schedule in which she takes work home has resulted in her 20-year marriage to the Stanley Tucci character long having gone 'off the boil', leaving him admitting to his wife that he's yearning to look for 'experience' elsewhere, all to her evident displeasure.
Meanwhile a case comes up which will have larger repercussions than she realises - a situation where a young man (Ffion Whitehead) just shy of his 18th birthday and therefore legally still a minor under the guardianship of his parents, has developed leukaemia and needs a blood transfusion which would prevent him undergoing an almost inevitable slow and agonising death. All three of them are practising Jehovah's Witnesses and are withholding their permission for a transfusion. The hospital where he is being treated insists that this is the sole means for saving his life. Thompson is required to adjudicate and, prior to doing so, takes the unusual step of visiting the young patient in hospital, an act which turns out to involve her deeper than is desirable.

For the first approx. two thirds of the film I was thinking "This is really good." I'd read several critics who were less than impressed and up to this point I was sure they were wrong. Then........well, it's not something actually happening which turns it near fatally - ensuing events are actually just an extension of what had gone before  - but it goes into territory which I found just too hard to swallow as credible given the nature of Thompson's character. It's a shame because up to that point the storyline held such promise. I was also wanting to know more about Stanley Tucci's character. However, it must be said that although he's given star billing he really does play second fiddle to Thompson's judge and I don't think he has a single scene (every one of which is with her) more than a couple of minutes long. It's a pity because I've always liked him and I really thought that this could be his first really major screen role. Alas, it was not to be.

I think I read somewhere that the film's ending is different from that of the novel, even though the screenplay was written by the same. Whether that's the case or not I didn't find the film's conclusion very satisfactory - not so much a case of loose endings, more one of being off-kilter from the rest of the film.

Director Richard Eyre has given us a handful of superb films in recent years, including 'Notes on a Scandal', 'Iris' and the much earlier 'The Draughtman's Contract'. He deals a good hand with this one too, but I don't think that as an entity it comes close to his best to date.

If the whole film had been on the same level of excellence as the more-than-first half I might have ended up rating this with an '8', certainly at least a '7.5'. Regretfully I have to pull it down a bit from there, giving it a score which for many films receiving from me such a rating would be classified as 'good', but in this case reflecting what I regard as failed promise..............6.5.