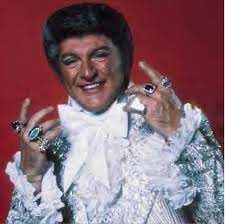 Oh blow! Enough of this shilly-shallying! Further to my blog of yesterday, let's now get this over and done with before I bore myself to death in a fog of torpitude.


Liberace's disc choices in this 1960 radio programme were:-

1) Rachmaninov - 18th variation from 'Rhapsody on a theme of Paganini' - the composer as soloist.

5) Mantovani - 'September Song'  [one of two selections, along with Nr 8, of compositions by Kurt Weill].

8) Frank Sinatra - 'Lost in the Stars' (title song from Weill/Anderson musical)  [a show of which I've never heard].


If he was forced to make do with only one of the above it would be the Rachmaninov.


His chosen luxury was, predictably, a piano - and his book of choice was 'The Magic of Believing' by Claude M. Bristol.


He felt his biggest consolation in leaving the world behind and to have to live alone on an isolated desert island, would be that he'd have no need to dress. "I hate dressing!" he said. (Who would have thought it!)

His biggest phobia was of bugs - flies, spiders, mosquitos etc.

His unfulfilled ambition at this time was to appear in a 'show' and in films as an actor. (Hardly a surprise that that was never realised!)

He liked to 'create things ' - and he loved fishing and gardening.