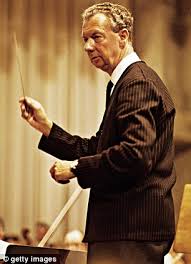 Documentary (narrated by John Hurt) on the internationally renowned English classical composer, 1913-1976, recounting episodes of his school life (reasonably well re-constructed) - and other aspects, with an emphasis on his loathing of cruelty (to man and beast), his being influenced by W.H.Auden during his 2-year stay in America, his being a conscientious objector in WWII and his espousing of pacifist causes and leftish politics throughout his life. His life-long relationship with tenor Peter Pears is openly referred to, though questions arising in recent years as to whether he may or may not have had paedophilic inclinations are not addressed. (There has never been any suggestion that he ever, even once, indulged in such).
I didn't learn much new about him, though I hadn't known he'd been such a prolific composer while still a child. He reached his 'Opus 100' still in his teenage years, including piano sonatas, chamber music and a large-scale symphony - though he didn't attempt to get any of them published.
There was passing reference to his well-documented habit of permanently freezing out of his life anyone who let him down musically or disappointed him professionally, not even acknowledging their presence  although the day before they'd been the best of friends. Something else I'd heard, which actually wasn't mentioned in this film, was that his attraction to the treble voices of boys, for which he wrote many compositions, was likewise only for as long as that particular boy could sing within that high range. The moment his voice broke, Britten would again cruelly ignore the boy from then on. Some have seen a liking for boys' voices which extended beyond admiration to an infatuation with them. Maybe - I just don't know. (I'd also heard that both he and Pears were singularly lacking a sense of humour - particularly when a joke was aimed at them.)

I've always had a problem to some extent with Britten's music. For a long time after I first became aware of him I often had the feeling that he'd so obviously try to avoid composing a hummable tune, veering off, as though in a conversation he was changing from an embarrassing subject. There was a 'contrivance' there which I didn't find with many other 20th century composers. In other words, there seemed to be a lack of spontaneity. Even now I occasionally get the same feeling - though it varies from piece to piece.
It took me many years to appreciate his operas. I've heard them all now, and though I really needed at least two listenings for the magic to work, some of them are truly extraordinary. I suppose I know 'Albert Herring' the best, having seen it on stage at least three times, and it's great fun - and quite melodious too. It also boasts possibly his best libretto.
And his largest-scale work, the 'War Requiem' is just phenomenal, something about which I could write a complete post.

A pretty good film, quite informative to some degree, perhaps more useful for those who know little about the man. Despite the inevitable gaps in his life story I did spend a fairly satisfying morning's viewing.