There were only three contenders for my much-coveted 'Raybeard Award for Film of the Month'. It took a little heart-searching (though only a little), finally to present it to:- 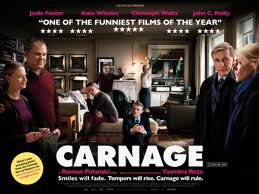 This type of 'lotta talk/little action' film is right up my street. It's the kind of entertainment I revel in. The sort of film in which Woody Allen, when at his best, was supreme. Mine is a very personal reaction which others may not share, but I go to the cinema for my own enjoyment, and this delivered it. More on this superlative piece later.