Trying to ignore the 'jumbo' in the room.......plus those BAFTAs 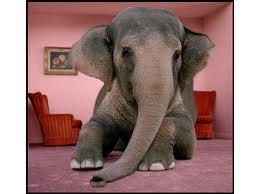 It's now nearly three weeks since being diagnosed with diabetes (Type 2 - as at now). It's been dominating all my waking hours, colouring every single thing I do - yet I don't want to go on bleating about my 'unfortunate' lot when there are millions on millions of people all over the globe who are not only in a very much worse situation than I am but who'd give almost anything to change places with me. So I spend a significant part of each day counting my blessings and hope that 'Jumbo' will at least go to sleep for a long while, enough for me to start forgetting his presence. I know he can't disappear. Anyway, the thrice-daily tablets to be taken will, unfortunately, remain as a constant reminder.

I've been tempted to bring forward my second-ever film review blog (due early in March) to pre-empt being influenced by the Oscar awards - not that it will, as I've already got short notes of what I'm going to say on the seven films I've seen so far this month. So I'll leave it for a couple of weeks more.

But just a couple of comments on the BAFTAs - I was really disappointed that 'Hugo' didn't win any major awards, being so remarkable a film - as also, but to a lesser extent,  'The Descendants'. But I was reasonably happy about the awards to Messrs Dujardin and Streep, though I didn't think the award to Christopher Plummer was anything more than "Better give him an award before he croaks!" - and yet again here we have a straight man playing a gay guy. (How very brave of him!) Not that he was bad - he certainly wasn't. I just didn't think his performance, or indeed the role, was anything exceptional.
And I do now regret not seeing 'The Help' when I'd had the chance. I was put off by more than one review who found its attitude towards what used to be called 'black people' insufferably condescending. If I do get the opportunity again, which I hope I do, I'll certainly make the effort to see it.
Posted by Raybeard at 02:25