No Pink Triangles in this 'classic' work. 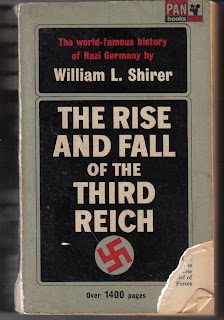 My third read of this hefty tome was as long ago as 1985 so a further one should be long overdue. After publication it quickly became considered to be a definitive account of World War II (including its causes and prequel) even though it was written just 14 years after the end of that war. Research since then would be expected to have given arise to revisions, corrections and amendments, but there have been none. (The author has been deceased since 1993 anyway.) However, I do remember it as being so awesomely detailed and so damnably readable. BUT.....
The second time I read it I noticed a curious omission. The next time it had become an irritation. There is no mention at all of the gay victims of the Nazis, though there is of others. The overwhelming concentration is on the plight and fate of the Jews, which could be argued as being fair enough (the author, by the way, was not Jewish himself). But not only is there no mention of  the persecution, internement and extermination of gays, from what I remember the only times homosexuality is mentioned at all is in connection with the gay Ernst Roehm, the some time leader of the S.A., where his sexuality is perceived as part and parcel of his advocacy of Nazi doctrine and methods - in other words, "What else can you expect from such a degenerate?" And not only does Shirer display that blatant prejudice in language which leaves us no doubt where he stands on homosexuality, to aggravate this horror, somewhere in the book (I can't put my hand on ezxactly where at the moment) he lists the numbers of the non-Jewish victims of Nazism - Poles, Gypsies, Communists, Intellectuals. Liberals etc - every group excepting one!  The message I get is that "the persecution and extermination of gays isn't really worth mentioning, or if it is, it wasn't all that bad". In fact I ask myself if Shirer might even have supported it!

I've found on the web a well-written piece by Peter Tatchell (1995) on this very subject:-


I'm now not sure whether I want to re-read the volume now. Like so much literature (fiction as well as fact) as well as films etc of those dark pre-enlightened days, Shirer was probably doing no more than espousing opinions which were, at that time, widely held. But if that was the case and if he did change his views, why did he not amend his book later when he had over 3 decades to do it? I suppose he would have said (assuming that he did regret the omission) that it was a question of priorities. But that's only surmise.

If I do decide to read it again I'll have a nasty taste in the mouth even before I start.
Posted by Raybeard at 09:21