'BORIS and the SEAGULL'

Actually there's no connection between the two. The opportunity to use a cracking good title was just too irresistible!

First, BORIS. Isn't he a beauty? 'Enthrallingly magnificent' is maybe nearer the mark. (Photos taken last week during my NON-holiday trip away.) 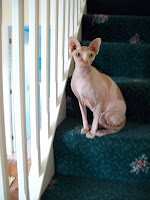 He's owned by one of my nephews who bought him for £800 (about $1,300 American) a few years ago. Totally hairless (and whisker-less) this sphinx cat is a real sweetie. Very affectionate, it's such a shame that he's left by himself in a large house for the greater part of every day, as his owner, who lives alone, is out at work. And even when my nephew's not working he's out gallivanting around the world several times a year. He's been to Las Vegas half-a-dozen times already and is returning there in November. Can't begin to think of why that place has such an attraction for him! ;-) 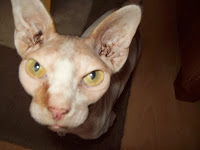 Anyway, when he is away, my own elder brother (my nephew's father) and his wife have to make a 10 mile round trip every day to the house in order to feed him. He won't settle in another place and is not allowed outside as those other cats who are not terrified of him and scamper away, square up for a fight. (The same old story, which is equally true for humans as well as for animals -  If anybody is 'different' then s/he is perceived as a threat.) 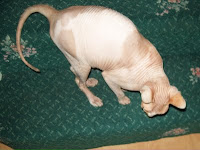 Boris loves being stroked, starting to purr immediately. But his skin actually feels very like rubber - and you can easily feel the bumps along his spine. My sister, who is also a cat-lover (though not as avid as I am) cannot bear to even think of touching him. But I just love the feel of him. On my visit he couldn't stop sniffing the lower end of my jeans. I suppose he can only have been picking up the scents of my own two pussies when they rub against me in anticipation of getting their food. It was a shame to leave him sitting on the window-ledge watching my departure. My brief visit was surely a rare moment of excitement for him.


Then the seagull:-
I wrote in a recent blog of how, back in my own flat, a gull has been getting through the window by the same route that the cats come and go - eating the cat food and then, finding it can't get out again, flapping around in the kitchen, flying against the window and pooping all over in its panic. Well, for a full week before I went away I thought the problem had been solved. It couldn't traverse the obstacles I put in the window gap which the cats could (just) squeeze through - at least until the day before I left when it got in yet again.
Now that I'm back I'm keeping the window closed all the time, watching for when the cats want to go out and come in - and when I'm out myself at the cinema or wherever, I have to lock the cats outside until I return.
So that's the present temporary situation. What I might do is to buy a cat-flap to fix in its frame against one side of the window opening and block the rest of the gap with cardboard or a piece of wood. Only problem is that it's got to be easily removable so I can take it away when the window needs to be closed. I'm only hoping that if I do this the pesky gull doesn't learn how to use the flap, but I don't really think it will.

Well, that's how things stand as at now.  Some more pics of my non-holiday to follow in my next blog.
Posted by Raybeard at 09:21