Look what I've found - dredged up from the past. 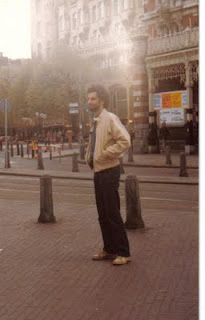 After many years regretting that I didn't have a single decent photo of myself from my 'Afro era' to show around, just this very morning, quite  by accident, I find this one.
Amsterdam 1980 - my very first of what was to turn out to be no less than 35 visits over the following 11 years. (Don't ask. You'd be right.) And looking as though I'd just wandered off the set of the original 'Starsky & Hutch' TV series. Oh, get those trendy shoes!
Can't recall who took the photo for me. That first time I went alone so it was probably a guy staying at the same hotel whom I must have wandered around with. Pity I didn't take one of him, which must have been rather rude. But maybe he'd refused, I just can't remember.
On all my 'gay-discovery' hols around this period I was often plagued by approaches and even passes from guys whom I didn't really fancy myself - so many of then being blonde and clean-shaven. Not that there's anything wrong with that, but my own attraction was, and still is, towards darker, hairy types. With the distance and wisdom (I hope) of passing years, seeing myself then as almost a different person from what I am now, I can just about  comprehend now that they were probably looking for someone in marked contrast to their own physical selves ( a kind of night and day scenario?), whereas I was going for a near-mirror image. The truth is probably that my attitude betrayed an arrogance and vanity about my own looks - or was it a case of looking for a 'comfort-zone' in what I was familiar with? Anyway, too late to worry about all that now. Self psycho-analysis is such a fruitless exercise.
So 1991 was the last time I was in Amsterdam. Love to go back but no doubt it has changed a lot. I know for a fact that my regular gay hotel has long since been handed over to new owners who cater for the male clients of 'ladies-of-the-night', so not much fun there then! Besides I don't have the energy any more to go traipsing around, making a tour of those magnificently sleazy leather bars with their dark rooms and glory holes, until 5 in the morning - or, if not that, then disco-dancing till the same early hours. Of course this was all just before the 'Big A' took hold and scared the bejeesus out of us. Every single new European friend I made in that decade bar one, who still lives in Munich, was taken, as were most of my small circle of English pals. But I don't have to make out that I was worse affected than others. Some of you reading this blog will have lost many more in total than I did.
However, just for old times' sake, I would dearly love to go back - and I shall -  just to poignantly re-live those memories on where it all happened - and, boy oh boy, there was so much of it!