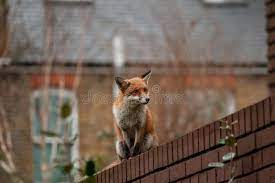 My flat is on the other side of the road from a large-ish park where, as I've known for years, a 'family' or more of urban foxes live. Over time, when I've got out of bed in the early hours, I've very occasionally seen one in the back gardens scavenging for food. Even with the odd cat around outside, including my own, they ignore or just accept one another, though cats seem the more wary and somewhat fascinated, without the overt hostility or fear they'd exhibit against dogs.

A few nights ago I found the food which I always leave out overnight for my own furry threesome not only eaten up entirely and the milk-bowl licked dry, but also my indoor rubbish bag, prior to putting in bin outside, had been ransacked, with tea bags, avocado skins, cat left-overs etc littering the kitchen floor. (I leave the kitchen window open for the cats with a small gap for them to go in and out at will on their nocturnal prowlings). I didn't give the incident much thought then and there, thinking another cat had been the culprit. However, on the following evening, sitting watching telly with one cat on my lap and another nearby, they both became unsettled and got up to peer down the hallway above the stairs. I rose to look and there, disappearing through the kitchen window was the brush of a fox tail - and evidence of ransacking once again. It was clear that at least one of them had got bolder.

Searching the internet for a fox-repellent, they all appeared expensive and more geared to gardens or farms rather than domestic 'invaders'. But it seems that scents which foxes actively dislike include garlic (I'm with the fox there!) and chillies, so I bought some of both and, as instructed, crushed some of them in a bowl and added boiling water, which I've left on the kitchen window ledge for the last three nights. Seems to have worked. But only this morning, at 5 a.m. and temps well below freezing, looking out with a torch, there on the wall, watching me dolefully was a fox, with a pleading look which said 'Please give me some food!' I felt so incredibly sorry for the poor creature, it was heart-breaking. But didn't dare to respond as I wanted to, knowing that if I did it would only return again and again - and then acquiring a dreadful reputation as a fox-feeder and attractor from all the neighbours and beyond - and, to top it all, the lovely young couple neighbours under me (he a doctor, she a former nurse - could be extremely useful!) have an 8-month old baby!

So, as at right now I'm hoping that I don't see the vulpine visitor again, though I'm sure I will. And what if it gets brave or desperate enough to push in past the stinking concoction I leave on the window ledge? What can I do? Oh, the heartache! It hurts so! 😟