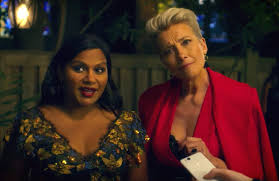 I thought this had some possibilities. It definitely had its moments, though not too many, but it did get bogged down in treacle just once too often, nearly all in the latter half.

In New York, Emma Thompson is the host of a late night TV talk show of some years standing, though now in a rut, as the ratings show. It's only just dawned on her(!) that her writing team consists of eight or so white men, all at or near middle age, so she decides to shake things up by employing a woman, any woman, to join the team (cue Mindy Kaling, who also wrote the screenplay) whose arrival is the opportunity for some rather predictable and lame jokes in the way of her initially assumed, being female, to be a low-level office worker. She has next to no experience of comedy writing though she does possess a fertile mind and imagination, and before very long she creates a favourable impression with the TV host. Thompson is something of a cold-hearted despot, firing members of her team almost on a whim, but her own vulnerability comes to the fore when she's told that she is to be replaced on her own show - and this affects her deeply and the only one she can really lean on is Kaling, who suggests what she might do to counter the replacement threat. Although Thompson herself is too elevated to realise it she needs the help of this confidante and only appreciates Kaling's true value at a late stage.
Thompson's own understanding husband (John Lithgow) now retired and suffering the onset of Parkinson's, remains at home watching his wife's changing TV persona.

I'd not heard of Canadian Mindy Kaling before and I don't think she'd be widely recognised on this side. Her script is functional enough without setting the world alight, but what I did find with her is that she has a tendency to garble her self-penned lines - often starting a sentence at comprehensible pace and then accelerating as though she can't wait to get all her words out, resulting in my thinking "What?". The contrast with Emma Thompson's speech is extraordinary, where every syllable is clear is a bell whether loud or soft, high or low - a lesson in how it should be done.

As I say at the start, it does get sentimental at times though those episodes are not as overbearing as they might have been.
Director Nisha Ganatra has a lot of television to her name as well as a little work on short features, a few of which might have been seen in the odd cinema. This appears to be her first major cinema
feature and it's not in any way a poor contribution - though I do get the sensation that it didn't quite hit home in the punchy way for which I was hoping................6.