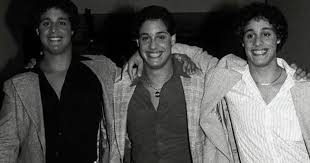 I don't recall this story at all, but it was world news in 1980 when three 19-year old men in New York, looking uncannily alike, happened to discover each others' existence - and finding that they were triplets who'd been separated shortly after birth, each having been given to a different pair of foster parents to raise them with no knowledge of each other. After the joy of their simultaneous discovery they find they have, not only an extraordinary physical resemblance, but also matching traits, behaviour and mannerisms, and even history. They become national celebrities and they set up a restaurant business together. However, as one might suspect, it's too perfect to last. A cloud appears as they attempt to find their mother and to discover why they'd been treated so as babies. The story becomes unwholesome and bleak, though they themselves, it hardly needs saying, remain totally innocent.

There's much archive footage of them appearing in TV chat shows, with present day interviews of friends and people who knew them both then and now, and talk with two of the triplets themselves.

It's a fascinating, disturbing and unique(?) tale, some aspects scarcely credible, and rivetting throughout in its search for the answer to the question 'Why did it happen?'

This is director Tim Wardle's first cinema-screen release, though not his first documentary.  He puts the story together quite well in logical sequence though I did start getting the feeling of a few too many repetitions, not only of archive footage of both TV and domestic movie shooting (though I realise there'd be only a limited quantity available) but also in things that were said. Thus although the film is only 96 mins long I think there would have been no significant loss in having had it shorn by around 20 minutes. In fact it might have carried a greater punch by being slightly briefer.