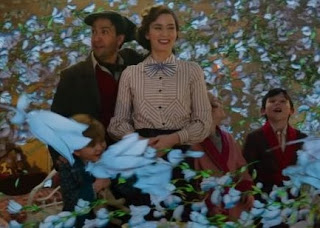 Loved it - and I mean loved it! This had so much to live up to, being a sequel to one of the most iconic films of all time, one which everybody knows and knows well, yet it rose up to the bar and cleared it, pretty faultlessly re-creating the style, whimsy and exhilaration of the original, with fine casting, and embracing a clutch of big production numbers which I wished could have gone on and on. In fact none of the songs really outstays its welcome - music by Marc Shaimann [of 'Hairspray'] and lyrics by Scott Wittman with Shaimann - all uncannily close to the spirit of the Sherman brothers' creations, whether reflective ballads or infectious toe-tappers. (The surviving Sherman brother, Richard, is one of the consultants on this).
I'd been trying to avoid seeing or hearing any reviews of this but did accidentally catch a glance at one which carped that the film "never really takes off" (I beg to disagree) and that you won't come out humming the tunes (wrong again!). For the mountain of expectation it has to climb I'd say that it could hardly have been improved on.

Emily Blunt in the title role is a bit more convincingly stern and school-ma'amish than as portrayed by Julie Andrews. Her singing and dancing are not a jot less than impressive.
Lin-Manuel Miranda (whose name I hadn't known pre-'Hamilton'), in his first major film role, is a highly appealing lamplighter Jack, every bit as screen-stealing as Blunt, and enjoying with clear relish his song and dance numbers. To my ears he makes a good stab at a Cockney accent, not anything like as jarring as Dick Van Dyke's. Whenever the original Poppins film is mentioned it's been compulsory for the last fifty years, at least in this country, to mention Van Dyke's misfiring attempt at the accent. I trust that Miranda's much more honourable effort won't get the same laughing, dismissive reaction.
Ben Whishaw plays (child) Michael of the earlier film a couple of decades further on, now widowed but with three young children, while Emily Mortimer plays his sister Jane who's moved in with her brother (subsequent correction: She's just popped in to help). - and Julie Walters as their maid appears again in one of those fill-in roles to which she seems to be consigned in her later years.
Whishaw (who actually has a song!) is a rather dour Mr Banks, not quite the martinet that David Tomlinson was as his father, but very staid, which is hardly surprising considering that he's only just lost his wife and discovers that he's about to lose his house, thanks to his deceptively evil bank boss Colin Firth. (Boo! Hiss!).
There's also David Warner as the Banks' neighbour, navy obsessed and roof cannon-firing on-the-hour - and in addition there are three other big names, only one of which appears in the opening credits. If you don't already know who these are (though I did) I'll hold it back as I wouldn't like to spoil the surprises.

Criticisms are few. The first song (from Miranda) appears before the opening credits and although it's fine in itself I think it might have done better by being an upbeat number to grab you by the lapels and draw you in. Then the second song is Whishaw's, rather nondescript and melancholy, especially when compared in hindsight with the jolly and fun moments to come. But once the film gets going there's no holding back, and it really is an unalloyed delight.

As in the first film, there are two musical sequences here where animation appears alongside live action, this time perhaps slightly less cross-involving than it was before, though nevertheless still immensely enjoyable.
Btw: There's no equivalent in this film of the 'Feed the Birds' song, which some may miss as I did, though that tune does appear briefly as background soundtrack towards the end.

Director is Rob Marshall ('Chicago', 'Into the Woods') who draws out perfection all round. I'm sure his contribution to the choreography was considerable and he does evince some breathtaking precision in some nifty movements, all completely in tune with the earlier film's conception.