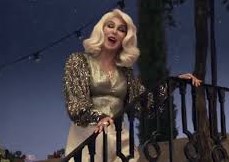 Well, what can one say? If it didn't quite come up to my hopes and expectations it was only by the slenderest of margins. The reasons why it was so, I think, was that despite this sequel/prequel boasting the wry verbal dexterity of Richard ('Four Weddings') Curtis who here is co-screenplay writer as well as co-story creator, it does try to fit an awful lot of story in. (Too much?).

The young Donna (Meryl Streep's character in MM1.) is played by Lily James. We see her showing how she met each of the three possible fathers of her child, bedding each of them in turn. All the while in this flashback/fast forward scenario, the grown-up baby played, as in the original, by Amanda Seyfried, is moaning the absence of her now deceased mother from the party she's holding marking the christening of her own baby (husband,  Dominic Cooper once again). The story does attempt to give plausibility to the unlikely, though I did find it getting in the way of the songs, and it was the songs more than anything else which was why I'd wanted so much to see the film in the first place - as it was, presumably, also for just about everyone else. I didn't find the 'fault' of being overloaded so much in the first film, with the consequence that the songs there showed up in relief with greater ease. Of course it has to be the songs which carry the whole project - and what songs!

I acquired all the ABBA albums at the time they were released and so I was familiar with all the songs chosen for both films, a few of which here make a re-appearance despite having featured in the original, and it's always good to re-hear them no matter how many times. I did like the inclusion of less familiar numbers which hadn't been released as singles - in this new film we get the lovely 'Andante, andante' just as in the first film we had the marvellously evocative 'Our Last Summer', which always gets me to the verge of blubbing as I can readily associate it with my own 'discovery' of Paris in the early 1980s. (These two songs both appear on the 'Super Trouper' album, consecutively, I think.)

Each of the younger versions of Pierce Brosnan, Colin Firth and Stellan Skarsgard (all present here to reprise their roles, of course) have their own songs, as do the younger Julie Walters and Christine Baranski characters.
Apart from the 'regular' cast (including a cameo appearance for a devastatingly beautiful song by Meryl Streep right near the end) there's Andy Garcia and - as you all know - one Cherilyn Sarkisian. (I was also pleased to see small roles for Celia Imrie and Omid Djalili).

The choreography is tight and the visual staging of the numbers, with their delivery, are perfection itself. I couldn't stop my legs from jumping to the beat, and I'm sure my heartbeat was dead-on synchronised too! Glorious stuff!

This is only Ol Parker's fourth feature film as director, his earlier efforts having failed to make significant impact. He was also co-writer of both 'Marigold Hotel' films. He does a good job in this film but I did find it ever so slightly more leaden than the first, which was directed by Phyllida Lloyd who'd made that one light and frothy almost right the way through (well, other than a couple of more serious interludes to provide 'shade' to the 'light'). Maybe it was due to this new one having a more explanatory story spelt out - though I think that for a musical we hardly expect realism and rationality down the nth degree.

Every few years comes along a film which I so enjoy that I pay good money to see it again in a cinema just a few days later. I did that for 'Mamma Mia 1', and the last time I did so was for 'Les Mis' in 2013. I will be seeing this one again, no doubt, though I'm not sure I'll be rushing back to buy another ticket so soon as I did before.