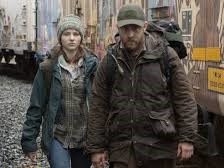 Highly pleasing, gentle, heart-touching film - and with, most gratefully, no hysteria! (Though the story might have invited it!)

Ben Foster is an unemployed army veteran (as we learn later) living in the wild with his 13-year old daughter (Thomasin McKenzie) in an Oregon state park, in effect a forest, where they both live contentedly. (The reason they choose to live like this is not explained. We have to join the dots ourselves). They are discovered by rangers and taken off to the local authorities where they receive sympathetic treatment and are offered a small isolated shack where they can live together. But they both get restless and sneak away to return to the forest where, as a result of an accident affecting the father's leg they are taken in by a kindly, oldish lady who offers them accommodation in the forest while a former army medic acquaintance of hers takes care for treatment of the injured leg, agreeing not to notify the authorities. (This is the America I want to see depicted - where people have a heart of gold and are not always out to get something for themselves. So different from the ugly, predatory side we've been seeing so much of in the last two years! ) Once more, when the father has sufficiently mended, they leave without notice to return to the home environment they are used to.

Director is Debra Granik (also co-screenplay writer) does wonders in bringing Peter Rock's original novel to the screen. She also directed 'Winter's Bone' (2010) which many are suggesting was even better than this. I disagree, rating this new film as far superior. (I rated the earlier film with a '6').

I must admit I was apprehensive throughout this film that something might happen to shock me unpleasantly, but no such thing occurs. There might be some criticism that this is too much of a 'one-note' film with only the slightest shifts of mood. If it's true then I found that aspect a refreshing one.

'Leave No Trace' wears its heart on its sleeve with full justification. Deeply affecting, sensitive and most satisfying...............7.5.