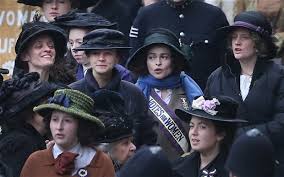 Another film where my verdict is at odds with most peoples. No big surprise there then. What may be less expected is that I thought it merited considerably more praise than IMDb's current low average rating of 5.9 would suggest (from over 900 viewers).
It concerns events of the female emancipation struggle and campaign in Great Britain, specifically in London, in the pre-WWI years. (Complete voting equality with men was not achieved until 1928. This film deals with a time when women were not allowed to vote at all.)

I feared that the film might drown in its own proud sense of righteousness, but it doesn't come anywhere near doing that. I found it intensely moving throughout, and I can't imagine anyone with a social conscience not being stirred to anger at how long we tolerated this hopelessly unjust situation, some of it actually defended by some women themselves, such had been the effectiveness of 'brainwashing' over our history.
Incidentally, it got me wondering why I cannot think of another film (aside, of course, from 'Mary Poppins') which mentions the subject of women's voting rights, let alone treat it as a serious subject. It strikes me as fertile, unutilised ground for a film subject.
The story told here does demand sentimentality in parts, but it's not a cloying sentiment merely added in for dramatic purposes. Director Sarah Gavron keeps the emotions in sensible proportion.

Carey Mulligan is a laundry (entirely manual) worker, having to work more hours than men employed there but for less money than the men earn. Doing a delivery one day she witnesses a group of women protesting for the right to vote by turning, for the first time, to violence against property, in this case, breaking store display windows. Although initially cautious with her sympathies, this event turns out to be the catalyst in her involvement with the campaigning movement, but spurred further on by the demeaning attitude of her male boss towards her and her female co-workers. Meanwhile, her suspicious, unsympathetic husband (Ben Whishaw), assured of a husband's superiority, becomes more hostile towards her activities, particularly when her agitations lead to her spending time in prison. To punish her he eventually descends to using prohibition of her seeing their young son.
She also befriends doctor and activist Helena Bonham Carter in a refreshingly unhistrionic role, and with whom she becomes bosom friends. Then there's Brendan Gleeson as a gruff, disapproving police detective determined to defeat this movement, using the police force and whatever means is necessary to stop the women - though there's a sense that he's reluctantly letting his heart be ruled by his head.
And we get a fleeting appearance from Meryl Streep as the movement's leading light, Emmeline Pankhurst. Her total on-screen time must be no more than two minutes, but she does make an indelible impression.

It's all shot in sober colours, as befits its constant serious mood, much of it shot at night-time. Director Sarah Gavron does a magnificent job holding it all together tightly, and with Abi Morgan's script too (she who also wrote 'Shame' and 'The Iron Lady'). The entire cast, female and male, is first rate.
If I do have any complaints at all it's the old bugbear of inaudible dialogue. In fact there were a number of short scenes where I could hardly catch a single word said, making me seriously wonder if it's my hearing that's getting defective. I did so badly want to hear everything as it's so important to the story.
But apart from that I was mightily impressed with this whole project.