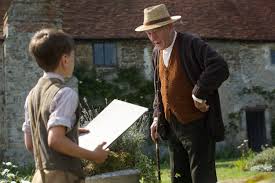 A lot of British cineastes who were keen to see this film may well have done so by now. I just managed to catch it at the tail end of its theatrical release in this country before it travels on to DVD-land. So, for what it's worth, here's my verdict.

Not uninteresting, though a tad over-long, it's set in 1947 with Sir Ian McKellan as the original Sherlock Holmes character, and now nonagenarian in retirement on the Sussex coast (also where I am right now) - and he plays it most convincingly, I must say. He lives alone with his housekeeper (Laura Linney, exhibiting an alarming range of accents) and her young son (a rather impressive Milo Parker), whom Holmes introduces into his hobby of apiculture. (The difference between bees and wasps is a salient feature of this aspect of the story). While Holmes' memory is becoming disturbingly unreliable and patchy, a condition of which he's sadly aware, he dwells on an unresolved case of thirty years previously, involving the death of a young wife with mental 'issues' and her likewise young, but overbearing, husband. There are a number of flashbacks, which reveal how McKellan gets the difference between portraying his two screen ages exactly right.

McKellan, for a long time I've felt, is rather over-rated as an actor, but here he's perfectly suited to his role. Linney, it might be argued, is miscast, but she does convey very well indeed the buttoned-up emotions of a housekeeper to an increasingly dependent old man who's visibly slowing down and becoming increasingly absent-minded. She seems wanting to burst out, be rude, and stamp with her impatience but she holds it in effectively and believably, really only giving the full extent of her emotions when alone with her son. She also displays a growing misgiving about the friendship developing between the old man and the young boy.

There are a couple of situations giving rise to moments of high drama but otherwise it's a leisurely-paced film. Photography is first-class throughout. I was also pleased to see that the soundtrack was composed by Carter Burwell, one of my favourites of contemporary film composers, and as usual he pitches it just right - on the edge of ones awareness without it being obtrusive.
Screenplay was nothing special to talk about but director Bill Condon does succeed in drawing the very best from his high-quality, small cast, Linney's roaming accent notwithstanding.