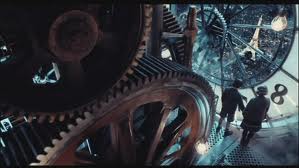 For only the fourth time in the last 10 years I've just paid good money to see a film in the cinema for a second time. This time the special one-off showing of 'Hugo' had the added attraction of being in 3D. I'd already seen the 'flat' version back in January which, even in that format, had captivated me. I was a bit reluctant to go, partly because it was showing on the very same screen as when I'd previously seen it. However, largely on the encouragement of my good blog-follower-friend, Paul, go I did.
In a previous blog I'd already nominated it as a potential 'film of the year' and it has now not only lost nothing of that status, but my appreciation of it has been enhanced. Visually, it really is quite extraordinary - and that has got to be its major achievement. The story has its sentimental passages for sure, particularly in the first half hour and towards the end, but it doesn't drown in pathos. I was also more attentive to Howard Shore's music score this time and, I have to say, it's pretty good without being ostentatiously distracting (though, perhaps, using Saint-Saens' 'Danse Macabre' a tad too much.). Even though in the story-telling I knew what was going to happen I was gripped all over again - and actually looking forward to seeing certain of the set pieces, this time jumping out in relief. I wasn't disappointed. I've seen half a dozen films in 3D in this latest resurrected wave of film fashion, and 'Hugo' is easily the most remarkable - in fact I'd say the only one so far which fully justifies being it being in that format, even though it holds up excellently in 2D too.
As I just caught it on what was probably a final opportunity to see it on a cinema screen in 3D I would urge anyone who hasn't yet seen it, even if it's only showing in 'normal', to catch this totally magical film. Can't understand why it wasn't thought merit-worthy enough to carry off a single one of the major awards at the Oscars and the BAFTAs. I wouldn't be surprised if, in years to come, 'Hugo' is going to be considered a landmark film, for visual effects if nothing else. Superb!

Btw: The only other films of the last decade which I've seen twice in the cinema - 'Mamma Mia!', 'Inception' and 'Chicago'. Doesn't mean that I thought these were the best films of recent years, though obviously I liked them. However, what they do have in common is that they stand up well to repeated viewing.