Gore Vidal - a man never to be overlooked 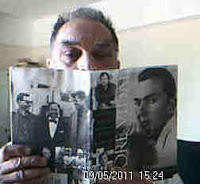 I picked up for a song at a car-boot sale the other day this hardback edition of Gore Vidal's biography by Fred Kaplan (1999) - and am getting much pleasure from it. This 800+ page tome is every bit as dense on detail as Vidal's own novels, of which I've read about half a dozen, even though I confess that I rarely remember them afterwards. To be honest, I seem to find that his erudition gets in the way of his story.
Vidal is a figure I've been more fascinated by rather than admired outright. For me his talks and participations in discussions have outshone the undoubted literary merit of those works of his which I've read - but, my God, he was such a precocious writer from such an early age!
At the turn of the millenium BBC TV had a 20-part one-hour weekly discussion series about the history of Christianity, covering one century per week. Vidal was a guest on several of them, joining various notable philosophers, not all of them Christians, or even theists, as well as prominent religious clerics of various denominations. He never let the chance go to make a withering comment on religion, especially Christianity of course, and, above all, Roman Catholicism. It was worth watching the entire series just to catch his put-downs.
I've just read on the Internet some of the reviews of this biography. They are by no means all favourable but the majority seem to think it a good or (often) a very good work, which I, reaching now its half-way point, would largely go along with.
Vidal, no matter what you think of him, was never one to suffer fools gladly. His enormous capacity for sexual high jinks right from his teenage years and well into adulthood (mentioned in passing rather than described in detail here) make me quite envious. But even without that aspect he's led such a colourful, eventful life - and the people he's met and known, in the arts and politics in particular, is a name-droppers cornucopia.
Now in his mid-80s he is obviously close to, or even now running, his final lap. It would be impossible to write a critique of American gay culture without mentioning his name several times, though he would be scathing about being included in it as he doesn't recognise that a specifically gay culture has even existed. Be that as it may, for me he remains one of the really significant figures of 20th century America.
Posted by Raybeard at 07:35