Scary for a few mins but all okay. 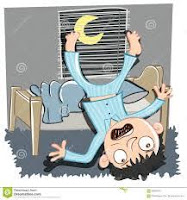 Bit of an alarming experience falling out of bed, even moreso for anyone around my age.

Having now got set into a daily routine of taking a mid-morning nap to make up for the lost hours in having to rise between 3 and 4 a.m. to attend to feline needs by serving them their 'breakfasts' followed by ushering them out and fetching back in where necessary, I returned to bed around 9.30 as is my wont on Sundays, having had my first run-through of the 'Observer', intending to rise in time to catch my weekly compulsory listening to 'Desert Island Discs' (Yusuf Cat Stevens today - unmissable).

More often than not on going to bed there are already one, two, sometimes three pussy-cats before me already snoozing there. Today Bobby and Snowball had already bagged their nicely separated 'territories' and I had to snake my body between them, only to be followed shortly later by Blackso, purring loudly and pounding a lower leg of mine, 'massaging' a calf, in effect. Any shifting around on my part would be unwise if I was to avoid being given a threatening hissy snarl on awakening any of them. Anyway I did manage to sleep for a little while but when the time came for me to leave the three deep sleepers, if I wasn't to disturb them I had to go through a series of contortions to extricate myself, only on this occasion to misjudge my physical centre of gravity and tumble right off the side of the bed with a thump - to look up and find three pairs of wide-open green eyes, censoriously fastened on me sitting there, twisted on the carpet. Now if I'd been younger, or even a sprightlier middle-ager, I would have got up and laughed it off. Unfortunately I'm long past that stage now and just getting on one's feet again in such a situation is no trifling matter. Looking this way and that for something to hold onto so that I could lever myself up, at an age when my muscles feel like they are trying to lift all dead-weight, I was sitting there on the carpet for at least a quarter of an hour, the cats having returned unconcerned to their dozings, my evident distress not being their worth to worry about, and probably with some irritation at me having interrupted their repose. Anyway, after struggling every which way, finally with the help of a door knob as a fixed fulcrum I did manage to haul myself up onto the edge of the bed again, panting and puffing like a steam train, but with considerable relief. When I'd gone down it was onto a hip and I did wonder if I might have injured myself, but it only took a few more minutes to recover from a trifling soreness, and soon I was right as rain again. But for a short while I did have some serious concerns as to my well-being.

It's not by any means the first time such as this has happened, the last time was maybe four or five years ago when I tripped right over in the same room. Simply getting up, and beside the same bed once more, took me even longer to get over than today's mishap. I fear that today won't be the last time either.

Oh, the 'joys' of senility, which I guess most of you haven't started to experience yet! It's a laugh a minute, I tell you!