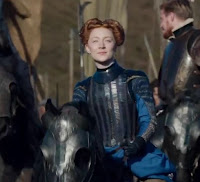 I found a lot of this tiresome in the extreme, culminating in an encounter between Mary and Queen Elizabeth (which, as every schoolboy and schoolgirl knows never actually happened) monumentally silly, and not helped at all by a weak script. Abounding in historical inaccuracies too numerous to list the film failed to engage me, its saving grace being the high quality casting and I spent much of the time trying to work out who it was under all that men's facial hair. Mary herself is played by Saiorse Ronan (with pronounced Scottish accent [but of course!] though Mary's first language was, in fact, French, and her English never rose above rudimentary) and Margot Robbie as her cousin and nemesis, Elizabeth.  Among the men were the estimable Adrian Lester and Ian Hart as well as an unrecognisable David ('Doctor Who') Tennant as firebrand preacher, John Knox. I have to confess to not working out which was Guy Pearce, no less, as well as missing Simon Russell Beale's appearances.

My interest in this saga of the conflict between the two queens was only sporadically awakened but it never lasted. The focus is on the early claiming by Mary of being the true heiress to the English crown, with her relationships and marriages thrown in as a kind of sideshow whose function was to stop one falling asleep. Mary's eventual execution (on the reluctant agreement of Elizabeth) is little more than glided over, and until the final captions nothing at all is made of her deciphered coded messages to outside supporters when imprisoned on her plan to take over the English throne, which was the pivotal factor in her being condemned, or so it is reliably argued.  As for the execution itself it couldn't have been more stately and dignified - almost saintly - than as shown here, with no wig falling off the (decapitated) head to reveal an oldish woman (she was actually just 44) rather than the reputed fabled beauty, and no mention of a little dog secreted under her execution dress - while by this time Elizabeth was surviving growing old before her time, disguising the conspicuous ravages of the pox by thickly painting her face white (though we don't get to glimpse her wooden teeth by this stage).

The settings are sumptuous as they ought to be, though there are a lot of darkly-lit candle scenes which didn't assist in the recognitions. The Scottish landscape was suitably rugged and spectacular. But it all should have amounted to so much more.

This is Josie Rourke's first venture into film directing and she probably has further to go and better to achieve.

Incidentally, immediately after booking my seat for this, on coming home I picked up the TV listings for today and found that at the exact same time as this screening, showing on TV was the identically-titled 1971 film with the high-powered  double-act casting of Vanessa Redgrave and Glenda Jackson, a film which I've not seen again since that initial release and for which I've been looking out. No sign of it being repeated (drat!), at least not in the next few days.