Some recent pussy pics - after being chivvied along to post some.

These pictures were all taken within the last three months.
After going through busy periods in my home 'drop-in centre' when there could be as many as seven or eight different neighbouring pussies coming through the window for a snack, these three are the only ones in my life at present, which is quite enough! I dare not think what became of the others though I do know that at least one was run over on the road, a sorry fate which was quite as possible for all the others.

The first two here are the old stalwarts, Blackso and Noodles, who've been with me 15 and 8 years respectively. Blackso has got to be at least 16 years old, maybe 17, and Noodles around 13-14. 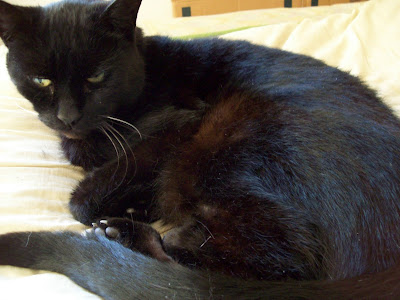 Blackso now starting to lose fur on his back and hind legs but other than that he's doing very well for his age. No sign of any pain or suffering in any respect - and he's never once been ill. Very occasionally he'll bring up food when he's eaten too much but I think that's quite common with cats.

Noodles spends his entire life sitting and looking out of the kitchen window or sleeping there. Starting only in the last few months, whenever I go into the kitchen for any reason he'll stir himself and cry for food, any time and all the time, despite there being, more often than not, anything up to half a dozen open trays of food available on the floor of food for him, Blackso or 'visitors'. He must think I'm made of money. I throw more cat food out than is ever consumed by any of them. As with Blackso, Noodles has also never been ill or suffered any injury. 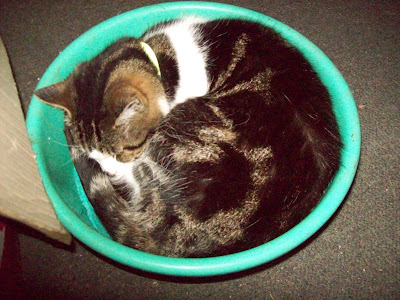 And then there's Patchie - whose home is actually around the corner, where they have several more cats, but like my above two he's made it absolutely clear that he wants to move in with me. He already sits Buddha-like, supervising who's allowed to come in and out, and for some months now has started sleeping all night in my bed with me, usurping Blackso's right of privilege. He's unusually fat-bellied though it's not through over-eating. He actually consumes far less than the other two. I think there's something peculiar going on physically with him although he's not noticeably suffering. He's bigger than the others though probably quite a bit younger than them. His owners know he's here and I suppose they're glad to have one less mouth to feed, while it's me who has to pick up the bill. 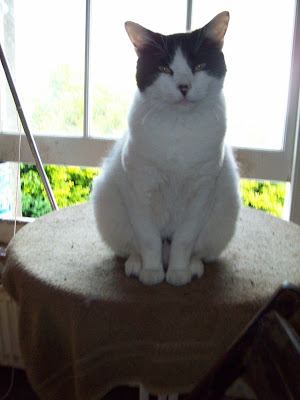 Now in the final picture, please don't get alarmed, but this is what I have to put up with what Blackso does, especially in the Summer, going and lying in the road in the most heart-stopping places. He really does sometimes turn my nerves to shreds. Is it any wonder I so dislike going out for any reason? - and when I do all the time is spent worrying about him. I suspect he does it deliberately to taunt me, the little scoundrel! 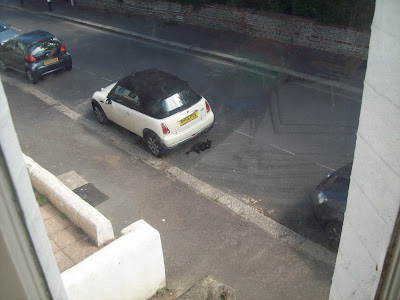 (I don't know why this picture came out dark. It's actually brilliant, warm sunlight, the only conditions in which Blackso does this.).

So that's my family as at now. If there are any changes or additions (I hope neither) I'll do another post - then, if not before.
Posted by Raybeard at 07:18